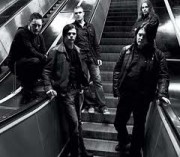 Gothic Metallers Katatonia have announced five European tour dates to celebrate their 20th anniversary. According to a Press release from Peaceville Records:

“With performances in Luxembourg, Germany, Holland, France and England the band will perform two sets at each show; the first set will see the band play ´Last Fair Deal Gone Down´ front to back the album that put them firmly on the musical map. The second set will consist of a mixed set of carefully picked songs from their extensive catalogue. In its entirety the show will be well over two hours of live music.”

Front man and lead guitarist Anders Nyström had the following to say:

“Who could believe that Katatonia would make it all this way, 20 years down the road… It’s quite amazing that 2011 will give us the chance to celebrate an anniversary most marriages don’t reach! Another pleasant coincidence is that our classic album ‘Last Fair Deal Gone Down’ has just grown a decade old itself, so what do we do, you ask? Well, THAT! We have decided to re-visit ‘Last Fair Deal Gone Down’ for the first time ever in its entirety and also to take the chance of digging up some of the more obscure songs that we’ve never or rarely played live while blinding in some well known classics from the rest of our catalogue. We hope you’ll come and join us in this special celebration as this shall be a one-time opportunity to witness the Last Fair Day Gone Night!”

Dates and venues are as follows: