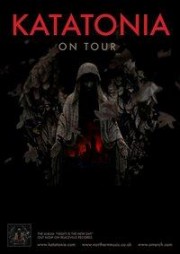 Swedish gothic metal band Katatonia has announced they will be playing a string of shows in South America during February 2011.  The tour will see the band visit Mexico, Columbia, Chile, Argentina, Uruguay, and Brazil.

Katatonia’s last studio album “Night is the New Day” was released in the US on November 10, 2009 via Peaceville Records.