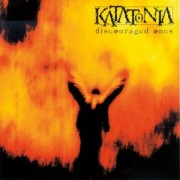 The album, originally released in 1998, was a single LP with lower sound quality, says the band, and this re-release on Svart records splits the album over three LP sides for a healthier and more accurate sound. It also features several songs from the rare “Saw You Drown” EP as bonus tracks.

Available on double vinyl on April 8th, fans can pre-order the LP version of “Discouraged Ones”  here.

Fans in Europe can catch Katatonia on a 5-city tour celebrating their 20th anniversary  in early May.