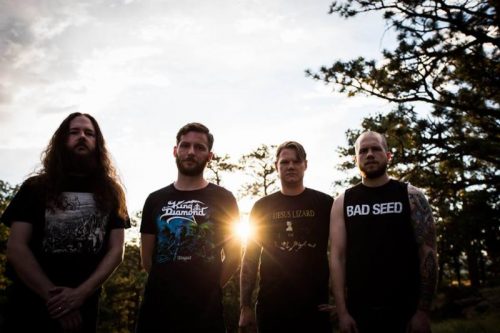 Denver’s KHEMMIS have already ensured that future bards will sing their praises and adventures far into the future due to the excellence of sophomore record Hunted alone. They blend the perfect amount of epic doom, harmonized guitar, melodic and grim vocals and attention to tone into a potent and heady battle brew.

Now the band has been confirmed to take place in the Seventh Annual Decibel Magazine Tour, set to run through North America from February 15th through March 10th. This is not out of left field, since Decibel gushed about Hunted as the magazine’s pick for album of the year of 2016 (no easy feat).

Issues the band, “We’re honored to be part of the 2018 Decibel Tour alongside Wolves In The Throne Room, Myrkur, and the legendary Enslaved. We look forward to playing in a number of new cities, particularly throughout Canada, as well as returning to a number of areas we know and love. We might even include a new song from our upcoming album — the only way to know is to be there!”

In other news, Orange Amplifiers welcomed KHEMMIS guitarists Ben Hutcherson and Phil Pendergast and bassist Dan Beiers as ambassadors, with all three now representing the company with massive new backline upgrades. Drummer Zach Coleman is also now sponsored by C&C Drums and Paiste. The C&C kit is made from their Gladstone shells, a 7-ply maple shell, which provide a deep and resonant tone. Read band statements and see more on these sponsorships at KHEMMIS’ Facebook page HERE.