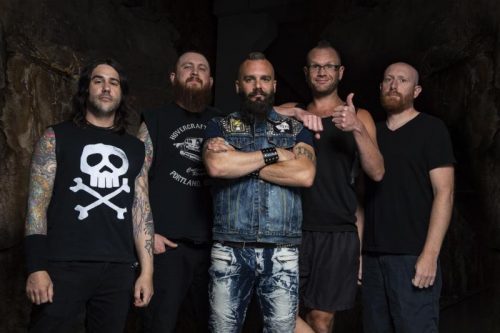 Big news today as Metal Blade Records is proud to welcome Killswitch Engage to their roster! Partnering with Sony Music Entertainment outside of North America, the band will be releasing their upcoming album in 2019 worldwide. I love all their records but consistently rock Disarm The Descent and As Daylight Dies in my car the most often these days. Whatever they do though always has the drive, passion and depth that fans know and love. And of course…RIIIIFFFS!

Man, with this in the works and the new effort from Exmortus coming out this week, we are having a jubilantly thrash-corian week, huh? Yes, I just wrote that. I will hang my head in shame now…or, bang it?

Metal Blade’s CEO/founder Brian Slagel comments: “I have been a huge fan and friend of Killswitch for a long time, so it is truly an honor to be able to work with them. So happy to welcome them to the Metal Blade family.”

Jesse Leach (vocals): “I’m beyond stoked to sign with the legendary Metal Blade Records and Columbia/Sony Music. It’s clear they truly understand and believe in what we do as a band, and we’re psyched to have them on our side. It’s an exciting new chapter for KSE and we can’t wait to see what the future holds.”

Adam Dutkiewicz (guitar): “I’m very excited to say that Killswitch Engage will be joining forces with Metal Blade Records and Columbia/Sony Music! Super stoked to join the ranks with a long list of many epic metal acts, as well as a team of excellent human beings who truly have a genuine love for metal music. Here’s to an awesome future with awesome labels!”

Benjamin Voss, Senior A&R Manager Columbia/Sony Music Germany: “I am very happy and proud to work with such an amazing band like Killswitch Engage in the future. We are absolutely excited about releasing their new album on Sony Music outside North America.”

Currently finishing work on their upcoming album, Killswitch Engage have taken a break from recording to embark on a summer European tour with Iron Maiden. The trek will also see the band appear at various premier festivals (Sweden Rock, Graspop Metal Meeting, Hellfest, etc.), along with a few special headlining shows. Then in the fall, the band will be touring across Australia with Parkway Drive. See below for all dates!