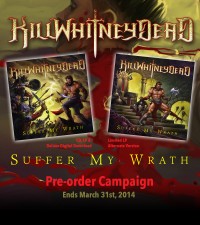 North Carolina metal band Killwhitneydead have released a a new track titled “Demon’s Consume” off of their upcoming album Suffer My Wrath. The album is set for release via Tribunal Records on June 10th however the band is encouraging people to pre-order the album between now and March 31st.

Regarding the pre-order the band stated the following: “This is like a Kickstarter/Indiegogo campaign except we aren’t using those websites.” You can help them out with that here.