Knotfest is back, and so far the lineup is awesome! 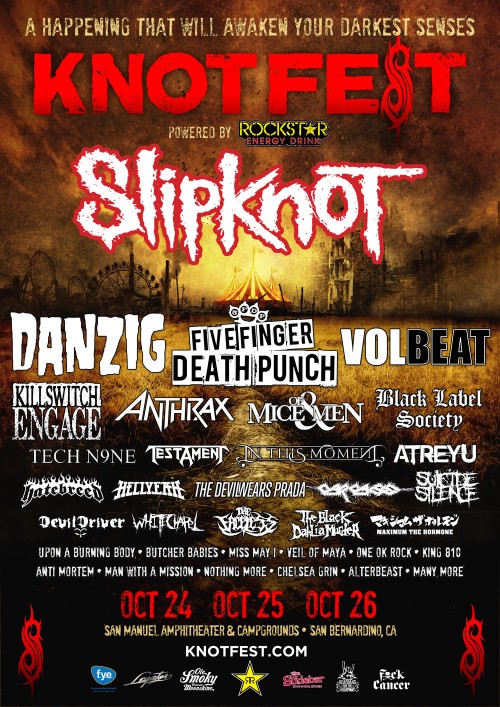 So if you haven’t heard yet, Slipknot is making new music and bringing “Knotfest” back once again.  So far the festival is featuring all sorts of awesomeness on 5-ish different stages.  There’s no mention of a 4th stage on the official site, but plenty of mention of the 5th.  So is there a fourth stage, and if so who’s playing???(or is the fourth stage just some other type of entertainment like fire breathers or midget stripper wrestlers?)

Judging from the info we have now, maybe the fourth stage will be full of other types of attractions.  What we do know is that the festival will feature performances by The Black Dahlia Murder, Chelsea Grin, Suicide Silence, Butcher Babies, Alterbeast, Satyricon, Otep,Amen, Prong, Immolation, In This Moment, The Devil Wears Prada,Butcher Babies, Miss May I, One OK Rock, Testament, Carcass, Maximm The Hormone, King 810, Man With A Mission, Danzig, Anthrax, Black Label Society, Hatebreed, Fear Factory, Napalm Death, Atika 7, Exmortus, Rattlehead, Killswitch Engage, Whitechapel, Upon A Burning Body, Anti-Mortem, Of Mice & Men, Devildriver, Veil Of Maya, Nothing More, Five Finger Death Punch, Volbeat, Tech N9ne, Atreyu, and even Hellyeah!.

Now that’s just so far.  I don’t feel like tagging each band individually so if you don’t know on please look them up.  The whole of this insanity is unraveling at San Manuel Amphitheater & Campgrounds in San Bernardino, CA on October 24th-26th.  You can find tickets right here.  There’s sure to be more bands announce so keep your ears and eyes open.

“In addition to performances from more than 60 of the “heaviest bands on the planet”, attendees will descend into an apocalyptic underworld featuring over 20 festival attractions including a Slipknot Museum (curated by the band), carnival rides, a zip line across the festival grounds, drum circles, pillars of fire, freaks, fire-breathers, stilt-walkers, and so much more.

Man With A Mission

Upon A Burning Body