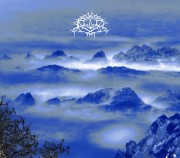 Profound Lore‘s bastion of experimental black metal, Krallice, have recently introduced their new album “Diotima” on the market, but for a limited time only, you can stream the entire album via NPR.