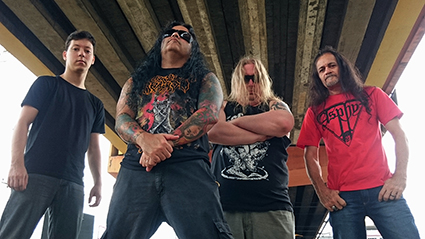 Brazilian death metallers Krueger are back. Bassist Ze Carlos is rejoining them after eight years away.

With the return of Carlos the band is going to focus on writing a new album entitled The End.

Krueger released a full-length album Return To Death in 2014.

Check out some videos from some Return To Death songs here.

Influenced by Death, Pestilence (HO), Obituary and others, Krueger began in 1987. The first demo, “The Lord of Death” was released in 1991 and was distributed only to fans, friends, brothers from other bands and fanzines. The second demo was released in 1995, featuring 5 live tracks including My Picture, The Real Side, Subconscious Visions, Low Life (Death) and Twisted Truth (Pestilence-HO). The first full-length album, “Turn on to Death”, was released in 2001 with cover art by Marvel’s Mike Deodato, and contains ten tracks of pure Death Metal from the eighties. In 2002 was released the EP “Bloody K”, with live songs and 3 unreleased studio songs. In 2003 the Polish label Time Before Time released a split-tape with Krueger and Sanctifier, entitled “In Mayhen in and Destruction”.
Krueger moved its headquarters to Rio de Janeiro in 1998 and made several presentations throughout Brazil, with many important bands in the national and international scene, including Krisiun, Chakal, Nervochaos, Hate Eternal and others. In 2010, Krueger built a small studio, The Cave, in the mountains of Volta Redonda, RJ state, and moved its headquarters again.