Lair Of The Minotaur return 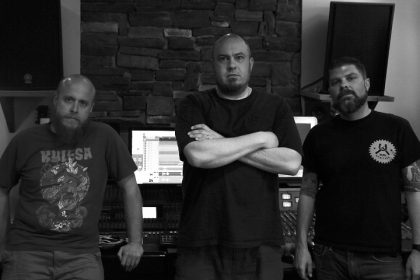 The brutalizing LAIR OF THE MINOTAUR trio rears its gnarled head once again in 2018; the band has just recorded a new EP and announced live plans for late summer.

Following an extensive hiatus sharpening their axes, the Gods have called LAIR OF THE MINOTAUR back to battle. The classic “road dog” lineup of Steven Rathbone (guitar/vocals), Donald James Barraca (bass) and Chris Wozniak (drums) gathered to record a new EP on Memorial Day weekend.

More below.
LAIR OF THE MINOTAUR Live:
8/31/2018 Empty Bottle – Chicago, IL @ Scorched Tundra Fest w/ Monolord, Telekenetic YetiFormed in Chicago in 2003, LAIR OF THE MINOTAUR has released four full-length LPs, and two EPs through Southern Lord as well as their own label, The Grind-House Recordings, all interconnected concept recordings based on the bloodier tales of Greek mythology. The band has toured extensively across North America and Europe, crushing all in their path with their own brand of heavy fucking metal that has been likened to being beat to death with a spiked club. In the words of Maximum Metal, “If there is a [band] heavier than this, then I have simply never heard it.”

More News On Lair of the Minotaur:

More On: Extreme Metal, General News, Lair of the Minotaur, The Grind-House Records
share on: