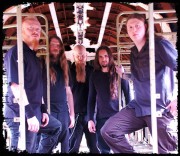 German death metallers, Lay Down Rotten, announce that they are busy recording their new album entitled “Mask Of Malice.”  This will be their sixth studio album. The band comments on the album:

“We are almost done recording our sixth album. We recorded at the Desert Inn Studio where we also worked on the last five albums. The new album will be called “Mask of Malice” and it features ten killer tracks that combine the raw dynamics of the typical Lay Down Rotten sound with the bittersweet melodies of death metal hymns you wanna bang your head to!”

The new album will be released in February 2012 through Metal Blade Records.

More News On Lay Down Rotten: