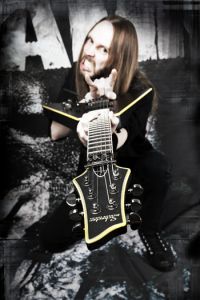 Vocalist Maurice Swinkels commented on the band’s dilemma and final decision to choose their new axeman:

“After guitarist Richard Ebisch quit the band around three weeks ago, we have not been sitting still. The day after Richard’s departure, I already had in mind to call guitarist Twan van Geel. I’ve known him for more than 10 years already and I knew he would be the perfect replacement. I called Twan that evening to tell him the situation in Legion of the Damned and asked him if he would be interested in a meeting with Harold, Erik and me. It didn’t really took long before he called me back and said he would be looking forward to it.”

Said van Geel on his new gig with Legion of the Damned:

“Asking me to be their new guitar player struck me as a bomb, Legion of the Damned has become a band that no one can deny or go around it, of course. Therefore it didn’t really take me a long time before I decided to take the shot and meet the rest of the gang. Being able to play in Legion of the Damned is an offer I can’t refuse, being able to finally play with the big boys, so to speak!”