Legion of the Damned – “Slaves of the Shadow Realm” 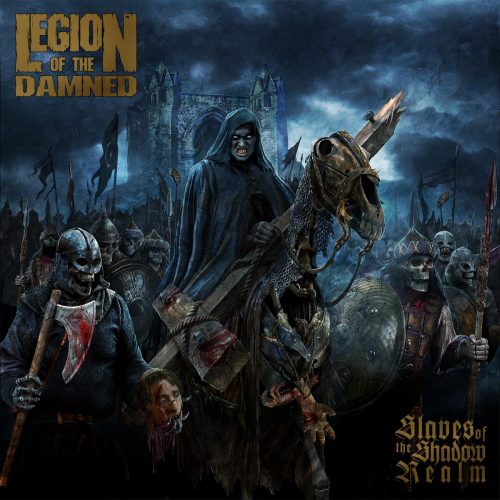 Thrashy death metallers Legion of the Damned return next month with the follow up to 2014’s Ravenous Plague. Slaves of the Shadow Realm, due out January 4 via Napalm Records, not only should serve as the soundtrack for your next session of Yu-Gi-Oh, but is a testament to band determined to make blistering extreme metal music. Slaves of the Shadow Realm will be the band’s eighth album since changing their name from Occult to Legion of the Damned thirteen years ago. It will be the band’s thirteenth album overall.

Check out my full review of Slaves of the Shadow Realm here.

The album opens with the poundingly fast “The Widows Breed.” Maurice Swinkels’ vocals grate as the drums pummel and the guitars eviscerate at breakneck speeds. As “The Widows Breed” ends and the listener is given mere seconds to catch their breathe, “Nocturnal Commando” roars to life with an intensity to challenge and build on the previous song. For the listener, it’s get in with the belligerent speed, or get lost in its undertow.

“Slaves of the Southern Cross” keeps the speed while adding in a bit of groove to the mix, as the title of the song becomes a repeated chantable line throughout.

“Warhounds of Hades” and “Black Banners in Flames” are two power-packed tracks that work well back-to-back to build the listener into a frenzy sure to have them thrashing around their living room – neighbors be damned!

All of this just in time for the tonal shift that is the beginning of “Shadow Realm of the Demonic Mind.” For the listeners who appreciate tonal shifts and aren’t looking for a fast album to bludgeon them from start to finish, this change will be welcome. The introduction to “Shadow Realm of the Demonic Mind” eventually does break into more of the standard Legion of the Damned fare. The track also features galloping guitars that threaten to trample the listener and leave them a bloody shell of their former self.

With album artwork that looks like something out of Tolkien’s worst nightmares and a solid eleven tracks,  Slaves of the Shadow Realm, out on January 4, is a great way to start 2019 right.

More On: Thrash, Album Review, Legion of the Damned, Napalm Records
share on: