Life of Agony, Walls of Jericho bring the love (and some STP) to Starland 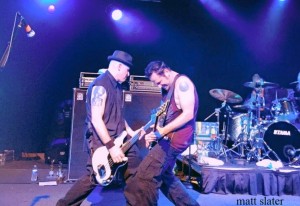 I’ve been a fan of Walls of Jericho for years, ever since the old Hellfest 2000 DVD with bands like Brother’s Keeper and Shai Hulud that Mic Todd gave me freakin’ 14 years ago (before we hated each other for a long time). There is one scene where Walls of Jericho’s confident vocalist Candace Kucsulain straight up flips some running dude over her and throws him into the crowd.

I dug The Bound Feed The Gagged debut a lot but in all these years have always missed them live, even
on some bigger package tours. It was worth the wait, a blur of inspired messages and crunching guitar attack.

I have, however, seen Life Of Agony. This was my third time seeing the veteran
band at Starland, vocalist Mina’s professed “favorite venue in America”. They
never fail to impress at this place, even if one of their rowdier anthems is called
“Love To Let You Down.”

No, Mina’s birthday bash found the group and their single opening act both in top form, delivering fired up and relevant sets to a crowd eager for some stress relief but wary of recent events. On Twitter Caputo had written before the show:

2all my #BadSeeds.. let’s keep it fun& exciting 2nite, but keep your eyes open!

Read in full BELOW. 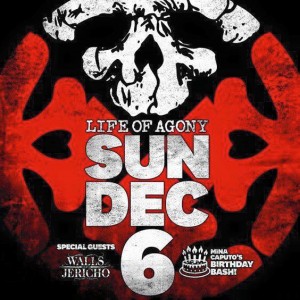 I thought I was seeing Two Fisted Law and Agnostic Front with mighty Dissolve and the Brick by Brick dudes in Poughkeepsie, NY but at the last minute my boy Jay from my good friends Painmask (Who Joey Z produced recently) hit me up with a ticket and I couldn’t miss Mina’s bday show.

The morning after and I am back in Upstate, NY listening to Sisters Of Mercy and slightly baked, cooling down with the lights off in my room with my dog and fresh from coming down off the show with a mellow morning black coffee slow sipping viewing of the second half of Fritz Lang’s classic “M” (One of the 10 Classic German Expressionist Films which Dave Catching from Eagles of Death Metal was tweeting about the other day, or someone from the Rancho De La Luna studio account).

Anyhow, it was a great and powerful night of high emotion. I don’t drink anymore but very much enjoy rocking out, though it also feels good to be an extra pair of eyes and ears, often. Or a designated driver. It was nice to see people in the crowd looking out for one another and also sort of being mindful.

A funny early part of the night was indeed the amped up and electric WoJ set, which found Candace noting all the different types of fans at the show, from punks to alternative to metal to, specifically, “All Out War” dudes. Haha, I laughed at that and have to tell Mike Score.

Walls have always had great percussion and did a great job.

LOA had a strong merch game, with some original artwork from comic afficianado and bassist Alan Robert, including an awesome tribute image he did for Scott Weiland’s memory. In fact, a highlight of the night was LOA’s beautiful acoustic tribute of STP’s “Plush” center set. The Joey Z and Mina energy on this one was great and the whole crowd sang along in true, un-self conscious ritual celebration. It was really nice.

I saw Type O/Pale Horse Named Death/Danzig legend Johnny Kelly in the house as well, chilling with the sound guy. 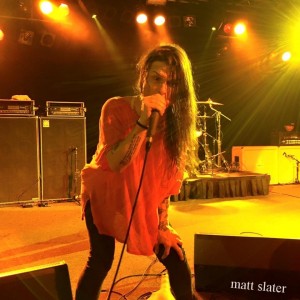 LOA’s “Other Side Of The River” was another true highlight of just a TREMENDOUS set that wasn’t celebrating one particular album like the nostalgic River Runs Red full set style LOA concerts have. But there is no such thing as “just a” LOA show, because even when they pull jams from assorted albums, it has so much more tribal love and lore than many bands. We all swim that river running red together and hopefully get to the other side.

One fan came from Australia and called them the greatest American band before proposing on stage. It was good stuff. The kind we all need more of. He also thanked the band for inspiring his ten years sober.

Now if you don’t mind, thinking of comic books for a second got me anxious to go re-read X-Force 38 from the Phalanx Covenant, which was almost a proper New Mutants comic as it features Cannonball and the wonderful Wolfsbane (she’s the coolest). 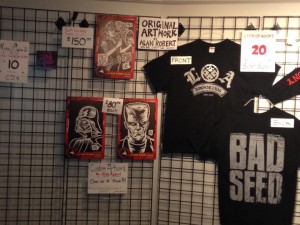 Take care of each other out there.