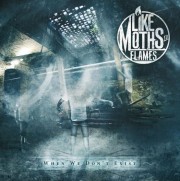 Ohio metacore act, Like Moths To Flames, have released a lyric video for their new track “GNF” off their upcoming album “When We Don’t Exist.” The bans has also released the track list for the album.

The new album will be released November 11th through Nuclear Blast.

09. Something To Live For