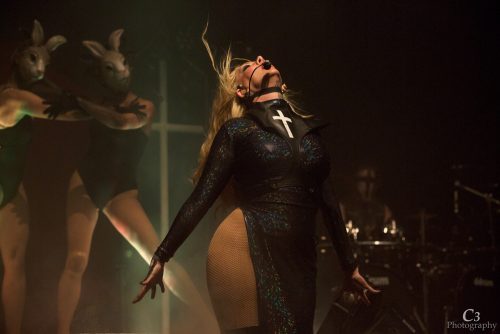 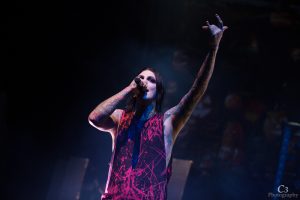 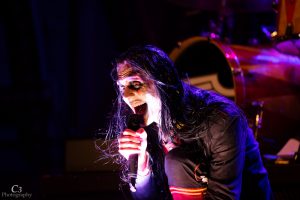 People who write off In This Moment as a gimmick band because Maria Brink happens to be a very theatrical and good looking woman are complete idiots. Bang for your buck, this is one of the most compelling and high spectacle shows you can see in any genre right now. In This Moment love their fans and have even beaten established acts like Korn and Rob Zombie at their own live game on recent tours. They are still hungry and yet are also fully confident and so in love with what they do. It really shows. 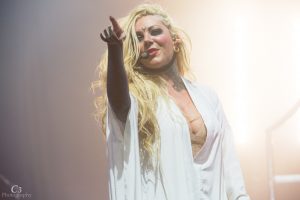 The Palace in Albany is a terrific and beautiful theater. I had only been there once before for a killer Jane’s Addiction show but this was much, much louder! The sound was great but damn! By the time Avatar was done my ears were ringing and I have been to a gazillion shows even Motorhead! Haha.

Sadly we got there a little too late to get shots of Gemini Syndrome but I was super impressed with how they warmed up the crowd. The hard rock and nu metal hybrid band have a few singles that, if people knew how to market rock bands better, would be massive.  I wish people actually supported active rock radio more instead of companies pushing it out of markets and making it nearly impossible to break solid rock bands anymore cuz pop is currently easier. Way to destroy the legacy.

Anyway, Gemini Syndrome got the large crowd including a big upper floor balcony rocking out harder than I have seen the fist band on a bill manage in many, many years (maybe ever). Newest album Memento Mori has the band improving on their songwriting and Aaron Nordstrom sounded huge on the big melodic hooks most of their songs contain. Their live show gave me a lot more respect for them and they gained a bigger fan.

While we didn’t get any shots of them, I will include their song “Sorry Not Sorry” because it has been stuck in my head super hard ever since the gig.

Avatar were the band I was by far the biggest fan of going in and I have to say they were so over the top and fun, just incomparable manic live circus energy. So fun. They pretty much should have been the direct supporting slot band to In This Moment, IMO. They were certainly a tough act to follow, even for Motionless who have a ton of fans. Not even close though.

The antics of Johannes Eckerström and the sophisticated chaos of the group’s focus makes them one of the most rock n’ roll bands on the planet right now, a macabre face fuck of cackling fun that wouldn’t be out of place in Gotham City but is straight outta Gothenburg. Fuck, they were so fun, loud and over the top.

Avatar really delivered in a not super long stage time and won over the crowd with ease. The songs from Feathers & Flesh were especially on point, though “Smells Like A Freakshow” was probably the biggest tune of the night for the band. I was so eager to finally see them and would follow them around like a friggin’ Grateful Dead fanatic now that I have. What a spectacle! I am not sure I have seen a band so hyper active since I first saw Mindless Self Indulgence! 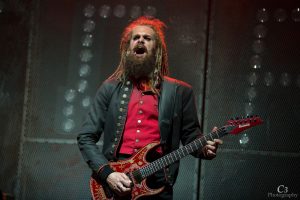 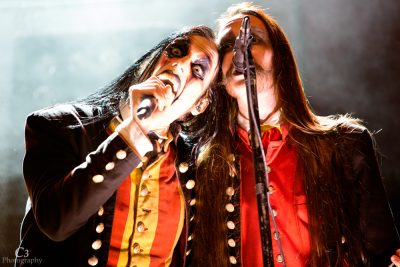 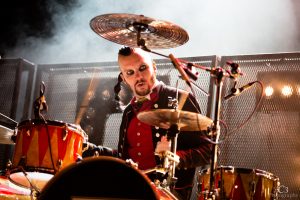 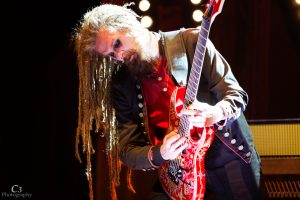 Now, I have been thinking about this. I am reluctant to trash on Motionless In White because it is great that any band is playing heavy music and getting kids into that world these days when there are so many shittier things out there and more distractions than ever. That said, they really aren’t my bag.

I saw Marilyn Manson support NIN on the Downward Spiral Tour at Madison Square Garden on like three bags of heroin when I was barely sixteen, not even bullshitting. Lucky I even lived through that night. But anyway, Chris just has way too distracting of a Manson thing combined with mall pop metalcore going on for my taste. The stage candles were cool and his enthusiasm was great. The band clearly love their fans and put on a good show. But even Aiden were more original (and a lot of William Control’s solo stuff is great, btw).

The most exciting part of MIW’s set was a fairly decently rendered System Of A Down cover because the whole crowd sang along. Chris admonished the audience a bunch for not being loud enough, but they never reached the same energy Avatar had in song after song with way less fans in the audience. It is kinda like when you see a decent horror movie and think “,Hmmm, that was kinda cool.” Then you see HUSH and think ,”That was fucking terrifying.” That said, if this is your band I mean no disrespect but I have seen a lot of better and more original bands in the twenty plus years I have been doing this. 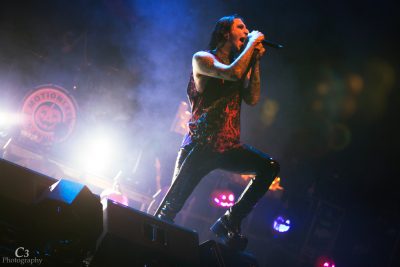 In This Moment pretty much blew me away. Maria Brink had little friggin’ kids in the audience singing along with her wide eyed and a whole room rapt with attention like they were watching an alien messiah. If you have never seen the band, their show is huge and full of production, dancers, amazing costume changes and lighting galore.

Maria was full of incredible and warm energy, encouraging the fans and giving out a lot of love to the crowd as well as to her own band. It was very electrifying, regardless of whatever your favorite metal genre is. The blend of pop, nu metal and heavier stuff was seamless. It made me stoked to think of how girls in attendance or even boys or trans kids or anyone would have no other possible take away than that here was a woman in full command of an awesome crowd. As I write this I am a bit bummed from the news that one of my favorite bands Purson has split up and while there are more strong women in metal and rock than ever, representation always matters. 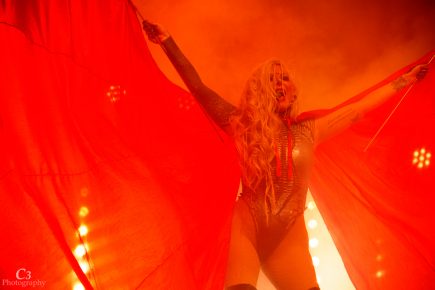 “River Of Fire” is one of the cooler and more hypnotic songs they have written, almost impossible not to sing along to and massive live. Brink’s vocal skills really come alive in that number. “Sick Like Me” and a cover of Phil Collins were also huge highlights, with a massive encore of “Whore” bringing everything to a close after a lengthy set, clouds of weed drifting through the crowd and massive amounts of cheering. Giant balls dropped down near the end of the show and Maria made sure to shout out the old QE2 venue where a lot of underground capitol region bands like Clay People and One King Down once cut their teeth. 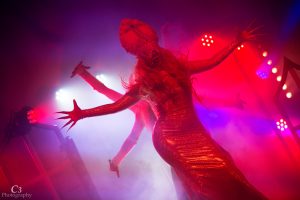 Bottom line, if you ever have any doubts as to why this band is so huge or think it is just Maria’s sex appeal, you are really selling them short and need to see her hold a huge crowd in her palm as her band rages and bodies whirl amongst the hypnotic lights, united in celebration of life. This was one of the most enjoyable hard rock nights I can remember in years. 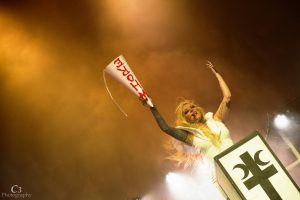 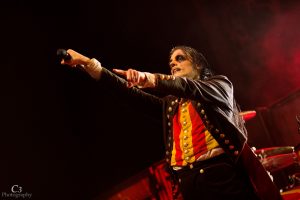 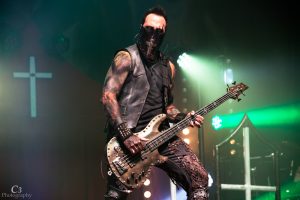 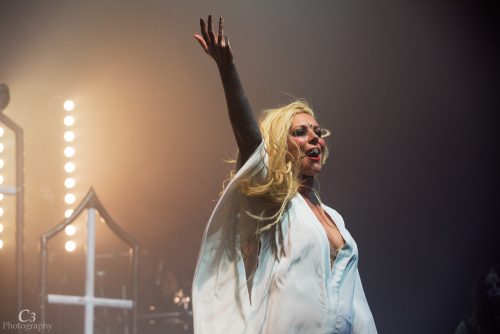 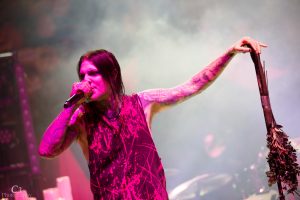 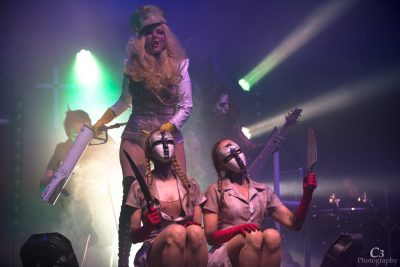 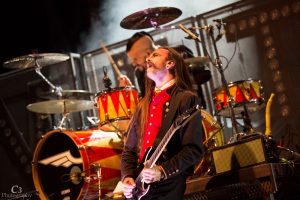 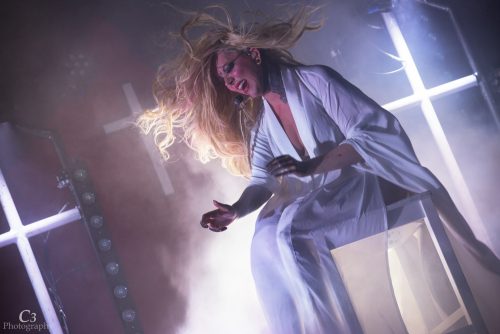 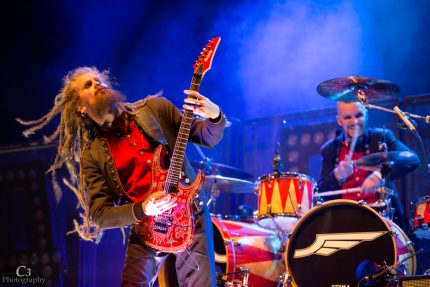 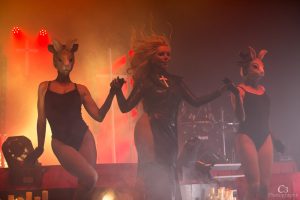 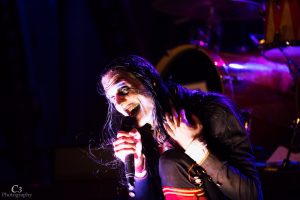 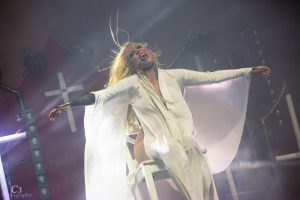 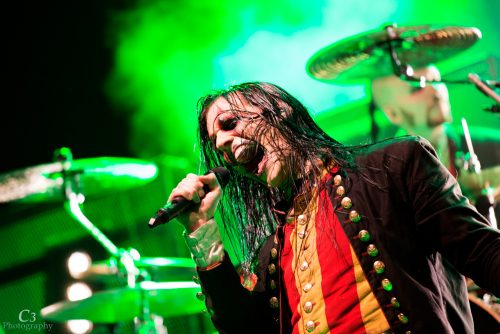 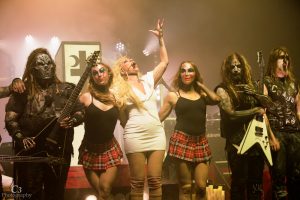 More On: Hard Rock, Show Review, In This Moment, Century Media
share on: