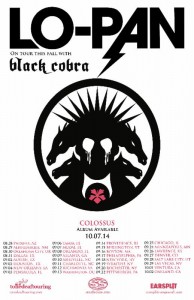 The tour comes in advance of the band’s forthcoming full-length, Colossus. Named for the Colossus of Rhodes – a ninety-six-foot statue of the Greek titan-god of the sun, Helios, constructed in 280 BC to mark a failed siege and the indomitable nature of the Greek city of Rhodes itself – LO-PAN‘s fourth opus serves as their most personal manifestation to date and a true testament to their evolution as a band. Having road-tested songs like “Eastern Seas” and the title track for over a year, and partnering with producer/engineer Andrew Schneider (Unsane, Rosetta, East Of The Wall et al) at his Translator Audio studio in Brooklyn, the Columbus four-piece knew exactly what they wanted out of this recording. They belted out songs that reveal just how much they’ve moved beyond their influences to arrive at their own sound – a style built on aggression without caricature, fuzz without cliché, melody without redundancy and their meanest groove to date.