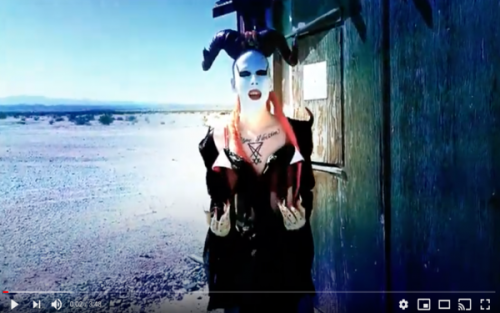 See the new LUNA 13 clip “Sekhmet” at Knotfest HERE. One of our favorite industrial metal acts, it is great to see the inventive, bass heavy and evil as fuck group thriving!  This song is in homage to a history of female warrior goddesses. Filmed in the duo’s home of Joshua Tree, California, the video is set in a desolate desert background and features contributions from art crew Grindhaus with the video directed by the group’s Otis Johnson

Dr. Luna says to Knotfest.com, “The video is a group of Wastelanders invoking Sekhmet in the desert with fire. It was the very first track we wrote for our God.Dis album release and represents our style of going from slow doom to thrash in a blink.”
Knotfest.com says of the video and track: The hellacious duo of Dr. Luna and Lilith Bathory continue to refine their signature of black metal adjacent electronica with their latest offering … the tandem’s latest is among the effort’s heaviest, indulging the band’s black metal sensibilities in a track that plays out like a spiraling decent into the bowels of hell.”
“Sekhmet” is the latest single from the dark lord duo’s album God.Dis that was released last November through new label, COP International (the home of Stabbing Westward, Chiasm, Stoneburner, Deathline International and Suicide Queen). Previous videos have included “Cursing The Sky” (premiered via Outburn) and “Sacrificial Lamb” (premiered via Decibel). Thematically, songs on God.Dis cover the grounds of witchcraft, nuclear war and modern conspiracy theories. It’s a release that Sonic Perspectives deems “feels both simultaneously ethereal and omnipresent.”