Lyric Video: All That Remains – “Stand Up” 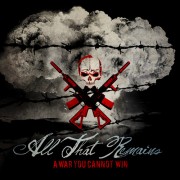 Massachusetts metalcore group All That Remains have released a lyric video to go with a new single from their upcoming album A War You Can Not Win. The track is called “Stand Up” and the album is due to be released in September via Razor & Tie/Prosthetic Records. This album will be the follow up to the band’s 2010 release For We Are Many.

More On: Metalcore, Video, All That Remains, Prosthetic Records
share on: