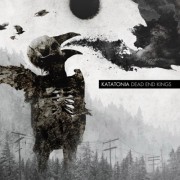 Swedish goth metal legends Katatonia have released a lyric video for the song “Dead Letters” taken from their upcoming album called Dead End Kings.  The album will be released on August 27, 2012 and 28th in Europe and the US respectively under Peaceville Records.   This is the follow up to 2009′s Night Is The New Day.

Dead End Kings was recorded Ghost Ward Studios in Sweden with producer David Castillo helping on the mixing. This album sees the recording debut of guitarist Per Eriksson, and bassist Niklas Sandin as well. Artwork is taken care of by longtime collaborator Travis Smith.