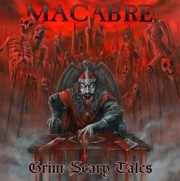 Macabre, Illinois’ own murder metal specialists, are back! After a near eight year gap, Macabre return with their latest platter of nursery rhyme fueled, death soaked tales of true life. “Grim Scary Tales”, an obvious play on Grimm’s Fairy Tales, is the band’s fifth full length album and is fourteen tracks of what we have come to know and love from the trio of Corporate Death (guitar, vocals), Nefarious(bass), and Dennis the Menace(drums). While I will admit Macabre can be a bit of an acquired taste and what others deem to be an uneven or inconsistent song flow, I see something else. I know of few bands who after twenty-five plus years and no line up changes can release a myriad of different songs on an album and still retain their sound, while sounding fresh and overall keeping things metal, even when some of the tracks on “Grim Scary Tales” aren’t metal at all (i.e. “Mary Ann” & “The Bloody Benders”).

Armed with a stellar production, “Grim Scary Tales” leaps out right from the start showcasing Macabre’s much underrated talent with “Locusta”, which really does come off as a Macabre skill lesson, proving that these three guys really know their instruments. Some exaggerated clean vocals from Corporate Death show up quite a few more times during “Grim Scary Tales” than have ever been featured on their past releases, but they are done in a nice and/or disturbing manner which usually enhances the song, as in “Nero’s Inferno”, “Lizzie Borden” and “Mary Ann”. The track “The Black Knight” unfortunately suffers from these very same clean vocals, yet still retains itself as a winner with it’s Black Sabbath influenced change up. “The Bloody Benders” delivers some pure twisted, bluegrass-ish Americana that show Macabre can really meld lyrical and musical concepts together in quite original forms, especially in the sometimes confined boundaries of metal. Elseswhere, “Grim Scary Tales slays with some classic numbers such as “Dracula”, “The Big Bad Wolf”, the uber-chunky “Burke and Hare”, and my favorite song from this album, “The Ripper Tramp From France”, which utilizes some very nice seven-string riffage, vocal interplay, and double-bass foot work that really makes the song stand out.

As stated earlier, these guys really do know their instruments and their overall performance must be commended. Dennis the Menace is one hell of a drummer who never seems to to get the credit he deserves, his foot work alone is fantastic and he can put his skills to just about any style out there. Nefarious shows us the true difference in a bass player and someone who plays bass, while Corporate Death conjures up some truly disturbing, yet somehow educational, musical and lyrical cacophonies like few others can.

While not as intense or brutal as “Sinister Slaughter”, or as delightfully demented as concept album “Dahmer”, or as well rounded and kick-ass as “Murder Metal”, “Grim Scary Tales” is a solid album. If you have never been properly introduced to Macabre or are just a mere acquaintance, then I would suggest picking up “Murder Metal” and even “Sinister Slaughter” before delving into “Grim Scary Tales”. If you and Macabre are good friends, then by all means go out and get this album and revel in it’s fun, quirky, death inspired mayhem.