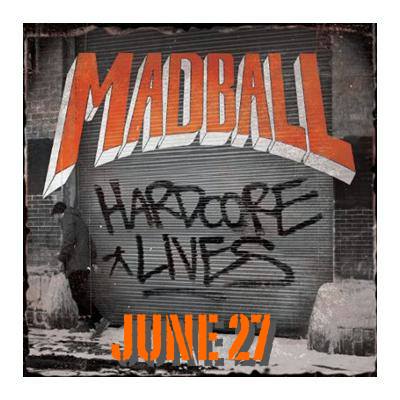 “Hardcore Lives packs a serious punch like only Madball can deliver. Mosh pits will erupt and fans both old & new will feel the fury!!”-Jamey Jasta (Hatebreed, Kingdom Of Sorrow)

Madball has premiered a new song via Brooklyn Vegan this morning. “Doc Marten Stomp” will appear on the NY Hardcore heroes, forthcoming album Hardcore Lives to drop on June 27th via their own Black N Blue Label for the U.S. and Nuclear Blast for Europe.

Involving an all-star roster of friends, Hardcore Lives includes the work of Ken Susi (of Unearth) as engineer, Zeuss (Hatebreed, Whitechapel) who mixed and mastered the album and Randy Blythe (Lamb Of God) who took the band pics for the album. Guest vocals appear from Scott Vogel (Terror), Toby Morse (H20) and Candace Puopolo (formerly Kucsulain, Walls of Jericho) as well.

Just returning from a European tour including Biohazard and Wisdom In Chains, Madball is poised to set it off in NYC next week. They will play new material while appearing with Body Count at the Grammercy Theater on June 12th.

Hardcore Lives is available for pre-order now and will include a digipak and limited edition colored orange vinyl, both including two additional bonus tracks: “The Beast” which also appeared on 2012’s EP Rebellion and “Spit On Your Grave” originally from 1992’s Dropping Many Suckas EP. Both tracks have been exclusively re-recorded for this release.