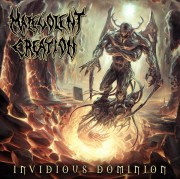 Florida based death metallers Malevolent Creation have uploaded a new song entitled “Target Rich Environment” to the band’s Myspace page. The track comes from their upcoming 11th studio outing “Invidious Dominion,” which will be released on August 24 in North America via Nuclear Blast.