Marduk cancels appearance at Metal in the Forest Festival 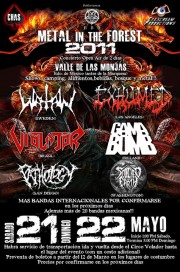 More bad luck for Mexico’s Metal in the Forest Festival as Swedish black metal veterans Marduk announce that they will not be appearing at the show.  Here is a statement from the band:

Dutch death metallers Sinister also recently announced they were cancelling their appearance at the festival which was to be the band’s final show.