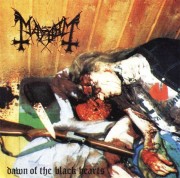 This is pretty crazy shit right here.  Anyone who knows anything about the Norwegian black metal scene in the early 90’s knows about the suicides, murders, and extensive church burnings.  If you don’t, do your research.  Two good places to start are the book, Lords Of Chaos and the movie Until The Light Takes Us. Anyways, this pertains to the infamous suicide of Mayhem singer Per “Dead” Ohlin in April 1991.  It has been widely reported that the band’s founding guitarist Euronymous made necklaces from pieces of the skull after finding Dead…well, dead, in his room.  Dead’s suicide became the stuff of black metal legend. Euronymous also reportedly took several pictures of the body and allegedly sent one to the owner of Warmaster Records in Colombia, who then used it as the cover of the bootleg live Mayhem album Dawn Of The Black Hearts.

So it turns out that the guitarist Morgan Håkansson from legendary black metal band Marduk claims to own piece of Dead’s skull and brain matter.  Whoa.  Seriously?  He was quoted in a recent interview with Loudwire and seems pretty nonchalant about the whole thing.

To read the entire set of quotes from the interview click here.

Marduk guitarist Morgan Håkansson had the following to say about owning a piece of Dead’s skull…and brain:

“Yeah, sure, I got it way back, right after he died. Back in those days they were living in a house and didn’t have the best financial aspects, so they didn’t even have a telephone. So I remember I was celebrating New Year’s in 1991 with Dead back home in Sweden. Then he got back, he wrote one letter [to me], then someone told me he’s killed himself.”

“So I wrote a letter and then I got the reply back from the guitar player [Euronymous] — ‘Well he just shot himself and here’s a piece of his skull.’ It was a shotgun, you know? So [he also sent me] two pieces of the lead and a piece of the wet brain. I’ve still got it. I keep it well protected. . . He sent it to all these former comrades of Dead. A few of them. There were not that many people … maybe five.”