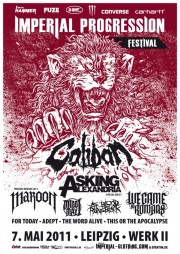 German metalcore band Maroon announced they will be playing at the upcoming Imperial Progression Festival. The festival will take place on May 7, 2011 in Leipzig, Germany at Werk II. Maroon remarked that this is currently their only planned show for 2011. They will be playing alongside fellow Century Media labelmates Caliban, as well as other bands including Asking Alexandria and As Blood Runs Black.