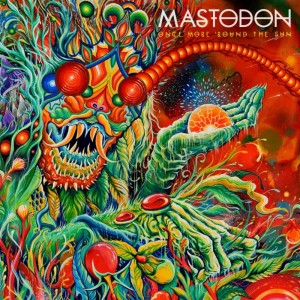 Starting today, Mastodon will launch a video featuring American artist, Skinner, who’s work graces the cover of the Mastodon’s forthcoming album, Once More ‘Round The Sun.  The short film showcases a conversation between Brann Dailor and Skinner taking about the genesis of the ideas that would eventually become the cover art. Skinner talks about his longtime appreciation of Mastodon’s music that would later inspire his creation of these lurid and iconic images. The internationally respected Art & Culture Magazine JUXTAPOZ will host the premier of the video on their website today. Click here to view and share.

Once More ‘Round The Sun, Mastodon’s sixth full-length studio album, their first since 2011’s The Hunter, will be released by Reprise Records on June 24th.  It was recorded in Nashville with Grammy Award-winning producer Nick Raskulinecz (Rush, Foo Fights, Alice In Chains, Deftones, etc.).

The first track from the album “High Road,” is available digitally now. Pre-order Once More ‘Round The Sun here and instantly receive a digital download of “High Road,”

As previously announced, on June 24th, the stunning Deluxe 2LP Vinyl Edition of Once More ‘Round The Sun will go on sale.This limited edition package will include two discs pressed onto 180g black vinyl housed in a quadruple gatefold vinyl jacket featuring artwork by the American artist Skinner previously mentioned, plus a CD of the complete album. The package will include four exclusive lithographs derived from the album artwork. Click here to explore the amazing album artwork. If you pre-order the Deluxe Vinyl Edition, you’ll be entitled to bonus digital content: An instant download of “High Road,” plus another album track (to be determined) delivered digitally prior to street date, and a digital download of the entire album delivered on street date. This one-time-only package will be available exclusively through www.mastodonrocks.com.  Don’t delay, as these will sell out quickly. Click here to view the beautiful Deluxe 2LP Vinyl Edition.

The next track from Once More ‘Round The Sun, will be the hard-charging “Chimes At Midnight. This Friday, May 23rd, you can view a teaser clip for the track here.