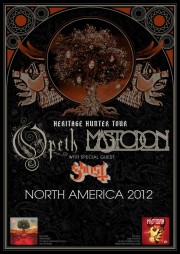 Mastodon have just announced a co-headlining North American tour with Swedish death metal gurus Opeth. But wait, there’s more.  Swedish doom metal band Ghost will be the supporting band on all dates.  These bands all put on amazing shows and the chance to see them together is not something I would want to pass up.

The bands have decided to call this The Heritage Hunter Tour as it is in support of Opeth’s most recent album Heritage and Mastodon’s most recent, The Hunter.

Mastadon collectively had this to say about the tour:

“We’re excited to co-headline this tour with Opeth for whom we have great respect and admiration. Having Ghost along as well will make this tour a special event.”

“We’re touring North America together with Mastodon soon. Nice! One of the very few metal bands of today that I genuinely like. Good people too! Ghost are coming with us as well, and they are one of the hottest new bands to come out of Sweden in recent years, and I dig them too. I sound like an old fart, don’t I? Well, I am.  Yet, am I right in thinking that this tour, this line up, is pretty decent? Would you all agree? Not complete s—, is it? Hope to see y’all out there! What are we playing? Not sure yet, but considering the company, maybe we’ll have to pull out the big guns from time to time. In order to keep up, I mean.”