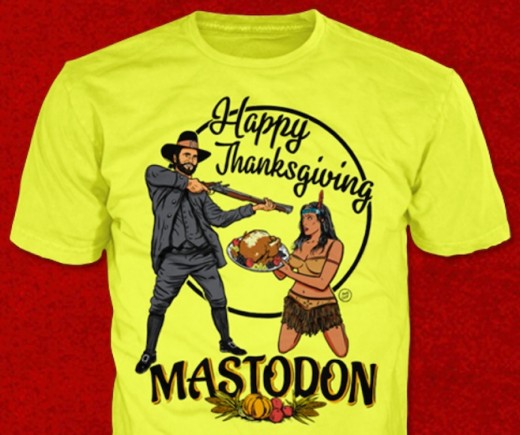 In case you missed it over the holiday weekend (well, if you live in the US), Mastodon released a Thanksgiving t-shirt depicting a white male pilgrim holding a shotgun to the head of a female Native American (that’s it up there). Naturally, this caused some online controversy, resulting in a lot of accusations of the band being racist. The band responded via their Facebook page, defending the shirt and explaining why they’re not racists:

“Regarding our thanks giving shirt, whether you choose to believe or not, the American Indians were massacred by the white settlers who became the Americans we are today.
this shirt represents this atrocity and celebrating in the face of this atrocity is chilling.
we may have a sick sense of humor, but we are far from being “Racist” as some of you who might not get it are calling us.”

Regardless of what your thoughts on the shirt are, you have to give them props for sticking to their guns on this one.

In related news, guitarist Bill Kelliher spoke with the UK’s Metal Hammer magazine last week, and he said that they were beginning tracking this past weekend, so expect a new slab of Mastodon goodness coming your way in early 2014.