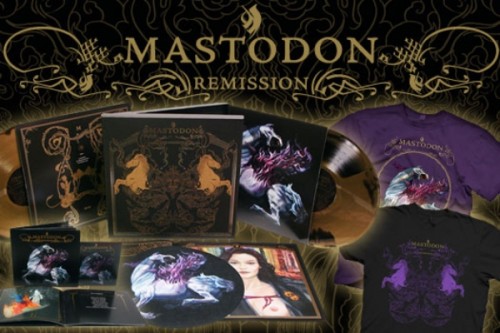 Relapse Records is proud to present a deluxe reissue of MASTODON‘s seminal debut LP Remission, a record that would immediately establish them as one of the most important bands in the history of heavy music. Exploding onto the scene in 2002, MASTODON combined an unparalleled level of musicianship together with songwriting sophistication that simply did not exist amongst their peers. Over a decade after its release Remission remains one of the most important titles in Relapse’s rich catalog, and it is with that appreciation that the label is proud to present a super-deluxe version of this classic record put together with the full cooperation of the band themselves.

The album has been fully remixed by original producer and engineer Matt Bayles and remastered by Ed Brooks at RFI. The CD cover art has been dramatically enhanced to showcase the iconic Remission horse in a beautiful custom 3D embossing with a UV gloss, special custom varnish and foil stamping. Additionally, album artist Paul Romano scoured his vaults to unearth 24+ pages of previously unreleased artwork originally created for the Remission album.

The album will see it’s reissue on August 5th (N. America), August 4th (UK/World) and August 1st (Germany/Benelux/Finland) on CD and a deluxe 2xLP boxset. Physical pre-orders along with a new line of Remission merchandise are available HERE . A trailer showcasing the new and expanded packaging can be viewed HERE.