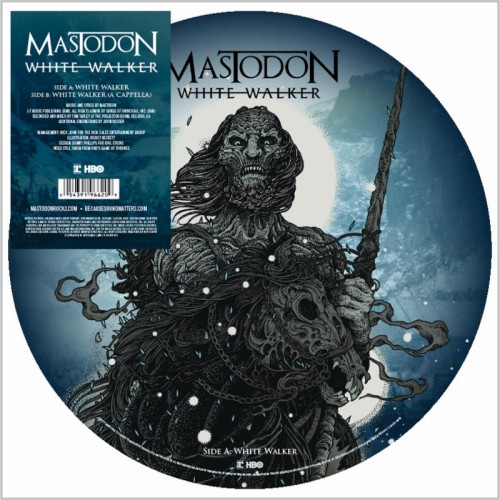 Mastodon will release a 12″ vinyl picture disc of their non-album track “White Walker” on February 19th via Warner Bros. Records.

Side A features “White Walker,” which was released digitally last winter as part of the Game of Thronesmixtape Catch the Throne: The Mixtape, Volume 2. The track was commissioned by the show’s producers when the band appeared on the show as extras. Insanely dope Welsh illustrator Richey Beckett designed the artwork, which was inspired by the show.

The B-Side of the 12′ features an a Cappella version of “White Walker”,the original idea for the song recorded by Brann Dailor on his phone in his kitchen.

The artwork is a still from the episode in which the band members appeared as murdered “wildlings” who are brought back to life by White Walkers.

The Mastodon “White Walker” picture disc will be pressed in very limited quantities and will be available for pre-order beginning today here and in retails stores beginning Feb 19th. Do not hesitate as these will sell out fast!