Mastodon to tour with Gojira, Kvelertak 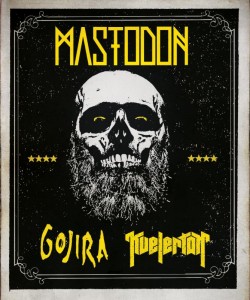 Ending weeks of speculation Mastodon have announced that they will hit the road for a headlining spring tour with support from Gojira and Kvelertak. The tour kicks off April 28th in Seattle and criss-crosses the U.S. before culminating in a performance at the Rock On The Range Festival on May 18th. Tickets go on sale this Friday, February 7th.

Mastodon have been in the studio in Nashville with Grammy Award-winning producer Nick Raskulinecz (Foo Fighters, Deftones) working on the follow-up to their critically acclaimed album The Hunter.

The recently released Mastodon Live At Brixton is available now. This live concert experience is available as an audio-only version and a live digital video version directed by Ryan Mackfall (Crashburn Media) (both featuring the full 97-minute performance) and is available from all digital retailers, including iTunes and Amazon. The full set-list is as follows:

All The Heavy Lifting

Curl of the Burl

Where Strides The Behemoth