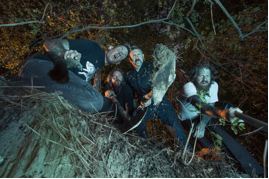 As previously announced, Mastodon have announced they will reissue all of their Reprise Records titles on vinyl in the coming months. The first album in the series will be 2006’s Blood Mountain, which will be issued today, March 3rd, on a mix of solid yellow and transparent green vinyl. Upon its release, Guitar World called Blood Mountain “pulverizing,” with an “utter restlessness that grips you tighter with each cut.” It also placed at No. 9 on Rolling Stone‘s Top 50 Albums of 2007. The next installment will be on June 2nd, featuring 2009’s Crack the Skye,pressed on baby blue vinyl. Earning Mastodon unanimous critical praise, the album led to Rolling Stone calling them “the greatest metal band of their generation – no one else comes close,” while Revolver praised Crack the Skye as the work of “a band at the peak of its musical and conceptual powers.”

Mastodon will also release a Limited Edition 12″ vinyl picture disc in celebration of Record Store Day on April 18th, which features original artwork by Mastodon guitarist, Brent Hinds.  The disc is comprised of a new song titled “Atlanta,“ featuring guest vocals from Gibby Haynes from Butthole Surfers, originally only available digitally as part of the Adult Swim Singles Series. The ‘B-Side” is an unreleased instrumental version of “Atlanta,“ and is exclusive to this very limited RSD pressing.

Don’t miss Mastodon on the road co-headlining with their friends Clutch for THE MISSING LINK TOUR, which kicks off on April 16th in St. Paul, MN, with support provided by Big Business. Sweden’s Graveyard will then take over the main support slot starting in Los Angeles on April 29th for the remaining dates, closing out the tour in Columbus, OH on May 24th.  Tickets are on sale now. Please visit www.mastodonrocks.com for more info.