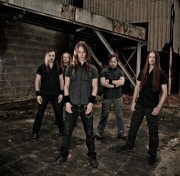 You can visit the MaYaN landing page at this location and listen to “Drown The Demon” and “Celibate Aphrodite” in their entirety.

Click here to read part one of the commentary.

“The most complex song, guitar-wise & the easiest to record. Frank [Schiphorst, guitarist] used a Bo-El MC7 with a Seymour Duncan JB in the bridge, and for the clean part a different MC7 with a thicker neck. We have Floor [Jansen of REVAMP, ex-AFTER FOREVER], Simone [Simons of EPICA], Henning [Basse of SONS OF SEASONS], Mark [Jansen, MAYAN & EPICA guitarist/founding member] and Arien [van Weesenbeek, MAYAN & EPICA drummer] already singing in this opening track. During the recordings, we were very open minded and used all singers’ qualities.”

02 | Mainstay Of Society (In the eyes of the law: Corruption)

“Originated from the outro guitar lick of track one’s ‘Symphony Of Aggression.’ Frank jammed this lick at the end of ‘Symphony’ and Mark wrote the base of ‘Mainstay’ in just one afternoon, based only on this lick. This one also includes the hardest guitar riff to play. It’s a track with mainly grunts, just some female vocals by Simone in the chorus.”

“The boys choir was recorded in London for our album, originally to be used in another song; however, the way they performed made us decide not to and put different music underneath, to give it an extra eerie feel.”

“Typical spontaneous song written at Mark´s place around the same time a multi-track fart-song was recorded. You don’t wanna know. Mark pressed ‘play’ on that certain recording later on, windows open. Great to see the faces on those people on their bicycles passing by!”