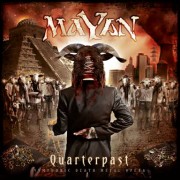 In the final installment of this track-by-track commentary, members of the Dutch symphonic death metal band MaYaN offer some insight into the final tracks that comprise the band’s debut album, “Quarterpast,” set for North American release tomorrow, July 12th via Nuclear Blast. Click here to check it out.

The band has also uploaded an album preview to YouTube which fans can check out here.

Sascha [Paeth, producer] was fooling around while Henning [Basse, guest vocalist] recorded his vocal parts. He put a pitch-shifter on Henning’s voice and turned it into this high-pitched chipmunk voice, but Henning could not hear that himself. It’s on YouTube here.

10 | War On Terror (In the eyes of the law: Pentagon Papers)

Mark [Jansen], Jack [Driessen, keyboard player], Ariën [van Weesenbeek, drummer] and Frank [Schiphorst, guitarist] shouting together in this one. ‘Sir, Yes Sir! Sir, No Sir!’ It’s the most heavy song on the album dealing with the so-called ‘war on terror’ which is actually a war to create more influence in the region and keep the oil coming, but it won’t work as we’ll all have to speak Chinese in 20 years anyway. 😉

No coins were harmed in this song! The church didn’t actually earn any money from us.

Frank improvised the guitar solo in the studio for fun. Didn´t think, just yanked that whammy bar. Technically seen the worst, but the result made us grin big time. In this song everything and everybody comes together one more time. It’s the grande final! The lyrics are co-written by Najla, she gives her vision on Middle East conflicts.