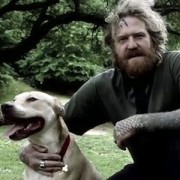 Hinds spoke about the project:

Recently, Hinds lent his acting talent to a local burrito restaurant and filmed a funny commercial for the spot. Check it out here!