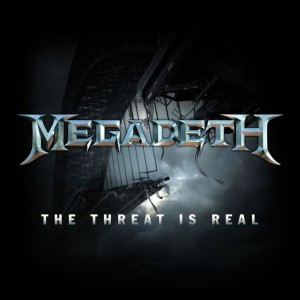 Megadeth‘s new track is probably the best thing from the band since the System Has Failed stuff, the last time I was really into more than one or two songs off a record (though Endgame was pretty decent). This new tune “The Threat Is Real” is awesome, though. Kudos to Mustaine for listening to the fans desire for some of the thrashier, more virtuoso side of Megadeth we have been missing. Listen HERE.

That said, I have never been able to listen to the band the same way since the Mustaine comments about Obama being behind the movie theater Dark Knight Rises Shootings. Look, we know he calls shots on the drone kill list but believing in the false flag movie theater shooting stuff as a plot to take away gun rights was really too much. We don’t need to fabricate shootings because they happen way too often. And I’m not even anti-gun. I think it is a tool like anything else but way too many people are not mature or sane enough to handle the responsibility. So yeah, Mustaine saying that made me go running for my Testament CDs instead. I’m not sure I’m ever gonna be won back fully from that, despite this track having some great performances on it. That said, it’s a real shredder and I loved it.