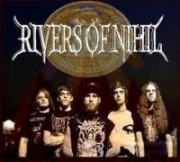 Rivers of Nihil are scheduled to record their Metal Blade debut sometime in March 2013 with Erik Rutan (Hate Eternal) at Mana Recording Studios in St. Petersburg, Florida.  Luckily the band has released a demo version of the song “Rain Eater” which will be featured on the album.  You can find it streaming right here.

More On: Death Metal, Signing, Rivers Of Nihil,
share on: