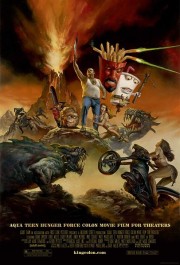 Stoners, cartoons, and metal somehow always seem to go hand in hand in hand and this week’s Metal Movie Moment is taken from the opening credits to an Adult Swim comedy that made it to the big screen. Think you know what is it? Click here to find out!

Clocking in less than three minutes, this is a true metal movie moment as opposed to an entire metal movie. Even better, this moment kicks off the superbly titled “Aqua Teen Hunger Force Colon Movie Film for Theaters.” The flick starts off with the classic 1950’s “Let’s All Go to the Lobby” skit, with some candy, popcorn, and hot dogs giving nice advice about how to behave during a film. Then Mastodon shows up… 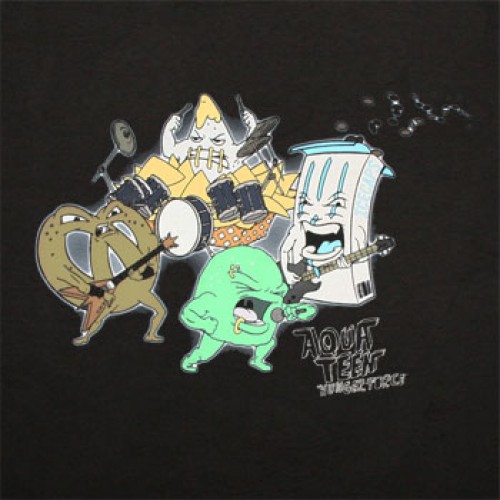 These satanic snacks give even better best advice (don’t make out, don’t explain the plot, etc.) while shredding and putting the ever-exclusive Mastodon gruff into the movie. They even enforce some FBI standards by yelling “If I see you videotaping this movie, Satan will rain down your throat with hot acid and dissolve your testicles and turn your guts into snakes.”

Hard to misinterpret that message! They also threaten to break into your house and tear your wife in half, and the title of the song “Cut You With a Linoleum Knife” says how brutal these animated assortment of snacks are. The animators did a great job getting a bit of Mastodon likeness in the images of the food (with drummer Brann Dailor looking so similar to a nacho platter) and the portions of the animated guitar shredding is fairly similar to the real life counterpart, although not quite as detailed as Metalocalypse.

Most metal moment: Singer Troy Sanders threatening “Did you bring your baby? Babies don’t watch this. Take the seed outside. Leave it in the streets. Run over it after the show!”