Metal Movie Moments: Until The Light Takes Us 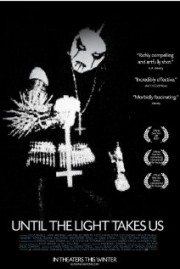 Our very first installment may be the most brutal metal documentary ever made and its final images will reside in your brain for years. Click here to read all about it…if you dare!

“Until The Light Takes Us” is a documentary set in Norway surrounding the rise (and temporary fall) of Black Metal, with interviews from the most influential bands in the genre: Burzum, Mayhem, Darkthrone, Immortal, Ulver, Satyricon, Gorgoroth, and a few more. The artists talk about what drew them to create the genre, what inspired the themes and imagery of the music and live shows, and ultimately what seperates Black Metal from all of the other genres.Its creators are young and idealistic and provide deep insights into who they are as people and what eventually drove them to create the unique brand of metal that Norway is known for. Fans of the genre will love the look inside of the creative aspects of the most original artists in Black Metal.

This is not purely a musical documentary, with much of the movie focusing on the relationship between Varg Vikernes (Burzum) and Gylve Nagell (Darkthrone) , which tells the tale of rebellion, arson, and ultimately, murder. For those unaware of the church burnings that occurred in Norway in the 1990’s, this is the best retelling of that incident, with Vikernes explaining his actions in detail without denying his involvement or motives. The documentary does not pick sides, but instead shows all artist’s opinions about the black metal (and church burning) scene in Norway. The final ten minutes are dedicated to Mayhem’s Frost giving a live “performance” in which he mutilates himself and slits his own throat to the shock and awe of people nearby. Truly heavy stuff.

Most Metal Moment: The suicide of Mayhem singer Per Yngve Ohlin (aka Dead) was photographed and used as the album cover for Mayhem’s live album Dawn of the Black Hearts. The story and corresponding images are haunting.

Check out the official trailer!

Add it to your Netflix Queue by clicking here.