Metallica to co-headline Lollapalooza without The Ramones, Psychotica 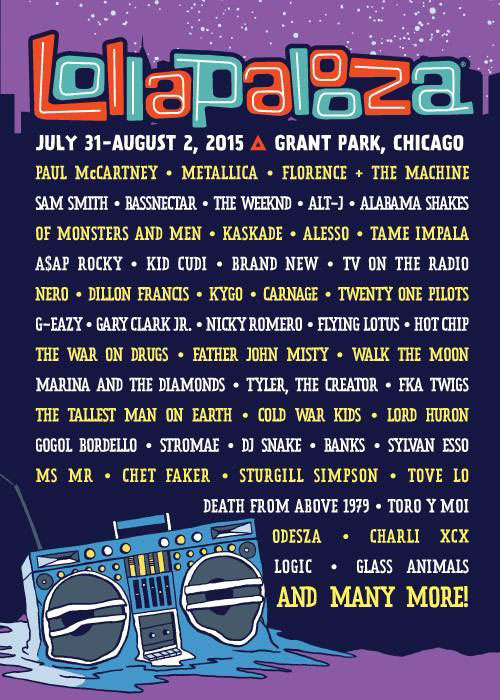 I just saw on Lambgoat that metal lords of summer  Metallica (Lars, I forgive you for the no bass on AJFA cuz it’s still my fave Metallica album)…ahem…are planning on co-headlining this years awesome Lollapalooza line up. Man, when I was a kid Lolla was the shit. 1996 when they last were headliners it was really controversial that a big metal band would play an “alternative” festival. This was the times when Axl had to make his arguably greatest “we’ve had our share of problems with so called Alternative bands” speech (Kurt Cobain/jukie remarks aside, Mr. Rose had some good points on being “human” otherwise) and Hetfield and co were seen by more cynical alt rockers as proto dinosaurs (which is funny and makes no sense since Metallica as well as Nirvana, Soundgarden and Melvins owe so much to the school of Black Sabbath equally. Soundgarden a bit more Led Zep, perhaps). Tangents.

I just looked up the 1996 line up for a refresher and grinned.

Wu-Tand and Rage! That was a fuckin’ team up and Republican people were like legit scared in America. It was great! And Psychotica! That band used to be HUGE in  NYC, at least. Did I see them once at Roseland? Shit, I forget. R.I.P. Joey Ramone, that’s what really matters. James, Lars, Kirk and Rob…please have one of your PR who might hopefully stumble across this article forward my suggestion that you do one of your rad Ramones covers i honor of Joey and the boys to commemorate your return. It’d be an epic Lolla win moment. Advice FREE. Memories…PRICELESS.

I’d also like to see a Tame Impala/Metallica unison version of “No Leaf Clover”. They can be called Tame Metallimpalicca. ok, I’m stoned.