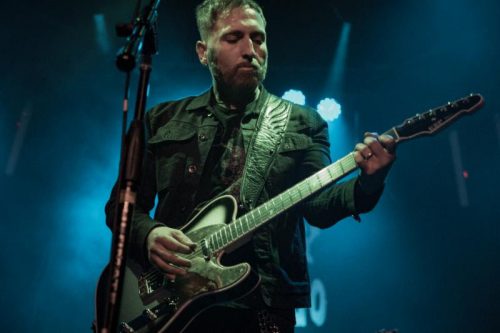 Los Angeles guitarist Monte Pittman has released a video for his track “Changing of the Guard,” which comes off of last year’s Between The Space.

The video for “Changing of the Guard” was filmed by Rokker Dave and features Jimmy Duvall (bass) and Cody Duvall (drums).

“The album ‘Between The Space’ is a heavy album that gets straight to the point as soon as it starts. The theme is about connection, alignment, and what divides those things. As always when I write, my goal is coming up with the material that fits in my live show. I did everything on these albums. I wrote it all, I played every instrument, I recorded it, and I mixed it. The only thing I didn’t do was the artwork (by Aaron Lea) and mastering (by Alan Douches). It was a challenge having so many tasks. It was a luxury being able to take the time and get everything just how I wanted it. It was a learning experience, and it was a lot of fun making it. The album ‘Better Or Worse’ is an acoustic album but it feels like a heavy album. The theme is about being attached to something or being unattached. It could be an idea or a thought process. The softest part of the album has the heaviest lyrics. It builds instrumentally as the album progresses. I wanted the tone of each track to be a little different from each other. ‘Better Or Worse’ and ‘Between The Space’ both mirror each other and they are polar opposites. The idea is to have something there for the people who like my heavy music, something for the people who like my acoustic music, and something for the people who like the variety of both.”

Check out the video for “Changing of the Guard” and Monte Pittman tour dates with Madonna here.