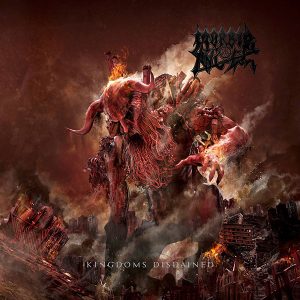 Morbid Angel have a lot to lose if their follow up to the much, uh, destained Illud Divinum Insanus has even one bad song on it. That record left such a poor taste in many people’s mouths that it made Limp Bizkit’s Results May Vary seem universally acclaimed. I am not crazy about the new cover art, which kind of looks like a much later wave up and coming tech death band rather than something we’d expect from such genre forefathers, but the fact that Steve Tucker is back has me very, very happy.

Shit, I am happy all around from ‘it’s about free speech’ people having to eat total shit due to the proof of Breitbart and Milo working directly with Nazis that broke today, and this Morbid Angel news also has me stoked. I really want the album to be good and so if it is I will look past the cover. The new Metallica art was awful but the album pretty much rocked, so there is that. Anyway, remember kids…racist and self hating collaborator karaoke is the most pathetic and least self aware karaoke and keep your metal raging and not cheesy.

Kingdoms Disdained will hit streets on December 1 through UDR Music.