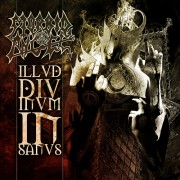 Florida death metal pioneers, Morbid Angel, have released the track list for their upcoming album “Illud Divinum Insanus,” slated for release June 6, on Seasons of Mist Records. Click here to check it out.

“Illud Divinum Insanus” is Morbid Angel’s first studio album since 2003’s “Heretic” and also the first album to feature frontman David Vincent since 1995’s “Domination”. Vincent was absent from the band between 1996 and 2004.

7. Destructos VS the Earth / Attack