Greetins cretins! Once again, I have brought you some fresh vittles to sink your teeth into. Before the show, I got to sit down with lead singer Chris “Motionless” Cerulli of Motionless In White for a great one on one talk. In true fashion, he was most passionate about his stance on self-expression and acceptance and his love for his fans, or “creatures,” as he likes to call them. Also, I learned he is an advocate for animal rights and has a massive handshake. Motionless In White is out on the Ignite The World Tour with For Today, Chelsea Grin, For The Fallen Dreams, In The Midst of Lions, and a special appearance by Lansing, Kansas’s Embrace This Day.

Alright. So how’s this tour going?

So far its been alright. Honestly, we’ve had a lot better tours. Its going better than we expected it to. We thought that a lot of the For Today fans and other people who aren’t fans of our band were going to give us a lot more shit, but its been fun so far.

Now, since the release of “Creatures” have you noticed an increase in fan base?

Oh yeah, definitely. Part of the reason this tour is going so well is that every night there is a group of our fans that are in the front singing along. For as much as the people that don’t like us or didn’t come to see us, there is definitely a bigger group outweighing that. You can definitely tell that there is a bigger fan base.

I saw you guys are heading to Europe pretty soon. How exciting is that?

YES! We’ve been wanting to go there for so long, just cause we feel like that’s the next step a band needs to take to progress and thats what we’re hoping will be good for this band.

Since we have been briefly, talking about fans, I have notice you really love yours. Last tour, you did the Dead Masquerade contest. How many submissions did you get for that?

I know we got a lot, but I’m not sure of an exact number cause it was mostly set up through our label [Fearless]. There had to have been hundreds.

What kind of mediums did you see?

All kinds. Paintings, drawings, everything. People posted stuff to our facebook wall as well.

Sweet. Anything hanging above your fireplace from that?

Not from that, but I do have this one at my house I got from a dude in Michigan of me and a couple different awesome things in the background, so that was really cool.

Are you or any other guys in the band visual artists?

Angelo [Parente ,drums] is. He does the art for all out merch and a lot of other bands you might see at Hot Topic. 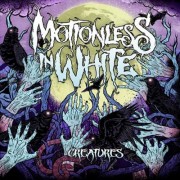 Let’s switch directions and talk about “Creatures.” The title track was comprised of lyrics submitted by fans. Again, “we love our fans!” How did you guys come up with that idea?

We wanted to do something that involved our fans more than just buying a record or buying a shirt or coming to a show. Just trying to find a way to get people more involved with our band. Were also trying to show that we are serious about our fans, rather than just saying “oh we love our fans” and doing nothing to show that love. I had twelve songs for the record and decided I could sacrifice writing lyrics for one of them and speak their words, since I’m sure a lot of people have a lot of different things to say.

I think that kicks ass. That’s very unprecedented. Now since we’re running into lyrical content, when you wrote “Creatures,” did it start out as a big conceptual idea, or did it progress into its own concept?

Its more a lot of different things comprised into one record, but it all has an overall feel, I don’t want to say unity. We called it “Creatures” as one, a dedication to our fans, and two, a lot of the songs are shit that our fans, or even if you hate our band, there is something on the record that applies to. That’s what every song has, something I feel strongly against or for, or personal problems in life with anything. I know that everyone goes through that stuff, so thats the lyrical approach I took to write stuff people can relate to, rather than trying hard not to for the sake of not being called a certain name or genre. I wanted to do something people can look at and say “wow, there’s another person that feels like that.”

The first time I heard “.com Part II,” I was like “I know this song!” I was real excited to hear an extension of it. Tell me about that.

Actually, you’re the first person that’s asked about this. We did the original version on our EP “The Whorror,” and when we were writing this record we kind of wanted to bring it back. We really liked that song, but we really weren’t happy with the way that it turned out, not a fan of the end result of “The Whorror.” That’s the song from that record kids always want us to play live, so we decided to make a part two of it, bring some new parts into it, but still keep the same chorus. If there was going to be one familiar part on the record, it would be that. It was kind of something to bring back from our past and turn it into something new.

It turned out really good, by the way. When I first listened to “Creatures,” I was really blown away.

Are you saying now you listen to it and you hate it?

No no no. Honestly, I listen to that thing constantly. It hasn’t left my iPhone since I put it on.

It’s all good. A lot of stuff I can see from “Where Love Met Discord,” this record sounds profoundly heavier, even deeper into the mix as well. What did you do differently with this release as opposed to that one?

Its a combination of a lot of things. When we were writing this record we knew that was the approach we wanted to take. We actually worked with a real producer, a real studio with better gear. Everything we did was an evolution and the next step from when we did “When Love Met Discord.” As far as the songs and the music go, we didn’t take the same approach. We recorded everything on a computer and wrote things that way as well. That way, we weren’t wasting hours just jamming parts out. It was just a smarter approach to how everything and I’m really happy the way it turned out.

Kind of shifting gears here. I did my homework and know that you are an advocate of self-expression and acceptance. What is the best advice you can offer to someone who is struggling to find themselves?

Don’t listen to what other people tell you. I feel that everyone who struggles with that, they struggle because they are told that they have to be something, that they don’t feel like what they are told to be. I think you should find it in yourself to just be yourself. Fuck what everyone else says and do what you want to do. So many parents say be yourself, but still criticize the individual.

Was there some great epiphany you had growing up, a great moment of realization that made you want to choose the path you just described?

I got into the way I am because of the music I listened to. Music influenced everything I am today. It is my life and it made me. A lot of people say “I wouldn’t be the same without this band” and now I know why they say that, cause I wouldn’t be either without, AFI, Misfits, Bleeding Through. Definitely getting into music that reflected on what I am helped. My parents weren’t really that into it or the tattoos. They were always supportive of me being in a band, but not really. They didn’t get it at first, and just because of the shit that I went through with them I was always like “No, fuck that. I’m going to do this, this is what I want to do.” I’m not going to stop just because they don’t agree with it or they don’t support it, I’m just going to do it and fuck everything else.

What do you think the root of al evil is?

I hear ya. I always joke with people and say I gave up Christianity for Lent.

Okay, on to lighter conversation. What is something you are into or passionate about that people might not expect? 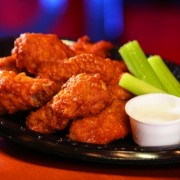 Chicken wings[laughs]. I used to be a vegetarian for awhile, but then I realized its just healthier on tour to eat better. People don’t realize the toll it takes on your body. Before we didn’t have this RV or this fridge or any of the commodities that we had now, so I started eating meat again. I don’t know if that makes me a hypocrite, but animal cruelty just fucking kills me. I don’t know why anyone in the whole world would want to abuse animals. Its really more towards domesticated animals, they’re your pets, they’re supposed to be treated nicely. To see people abuse them just sucks. I love dogs.

What kind of dogs do you have?

A pomeranian and a chihuahua. My growing up dog just died recently, so I have been dealing with that.

When I’m home I watch a lot of Netflix. We don’t always have wi-fi on the road, so me and Angelo and Ricky [Olson – bass guitar, backing vocals] watch The Office all the time. That’s something we’re passionate about [laughs]! It’s weird, we go on tour and we see each other every day, then we go home and we still hang out with each other every day. Me, Angelo and Ricky still go for chicken wings and watch The Office.

Awesome. What are three words to sum up Motionless In White?

Pissed off, relatable, and scary.

I like those. Thats all I got man. Thanks for your time.

More News On Motionless In White: