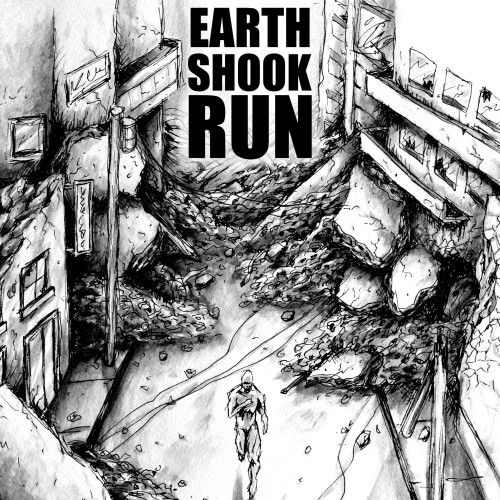 Hello there cretins. Here’s some new blood for you to suck on, Earth Shook Run. I chewed the fat with these guys and got a breakdown of their debut EP and it is a beast. Here is some of their goodies on their SoundCloud and you can get it anywhere bad ass records are digitally sold.

Read on for more about explosions and fucking with your ex’s head.

What is Earth Shook Run about?

Ed- If I could sum up what Earth Shook run is all about, it’s about making a statement, making some noise, letting people know that you’re there. It’s got everything.

Where do you draw your inspiration from?

E-I think Earth Shook Run is a really beefed up version of Snot from the 90s. Yeah, metal plus Snot.

If we were to put you in a genre, where would you say you fall?

Aaron- That’s a good question. One of the specific things we wanted when we were first talking about it together, we are No-core. se are every kind of metal and no kind of metal. We’re both so sick of the pigeonholing of metal sub-genres so we go with no-core. If you listen to the record, there is elements of every single genre of metal in there.

Ed, you tracked guitars, bass, drums and also did everything in post-production mixing as well.

You just got Aaron on a string singing, huh?

A-It’s important to mention Travis Phillips. He was an intricate part of this way before I came on. The two of them have been working on this for two years.

E-Three years. Travis and I worked on the drums together.

What kind of guitars are on the album?

E-Jackson and PRS. I did about eight rhythm tracks per song with the Jackson and made sure to separate it up with the PRS. I used Mesa-Boogie and Line-6 half stacks.

So let’s break this album down starting with your favorite track.

E-Suicide King because of the content itself. I had a friend that took his own life about two and a half years ago. He had been playing that first riff in the song for years. The song is written from his perspective seconds before he pulls the trigger.

Aaron, did you have any input with the lyrics?

A-The only song I wrote was The Here and Now. They were all pretty much done. We discussed a few tweaks here and there and he gave me some room to work. There is so many approaches to the vocals on there, it was very different from anything I ever did with Horse Called War. We just went with it because it was so refreshing and new.

Other than yourself, it sounded like there was more than one person on the album. I don’t know if that was a result of dual tracking, gang vocals, whatever. There is such a huge vocal presence.

E- Ben Childers is doing the back up vocals on Suicide King. Aaron said he could definitely hit the notes I was wanting so we got him on. I wanted it to not be so run in the mill, change it up and be diverse. More sincere. I was really happy with the way it turned out. Ben was pretty nervous so we gave him a pistol to hold onto. I learned that sense of control while holding a gun calms people down a lot.

Tell me about The Here and Now.

A-That is about relationships and things that you hold near and dear that are maybe held too close to yourself. It’s pretty much about the past couple years of my life with relationships and post-Horse. Sometimes you have to look at the past and let it go. If it’s just bullshit, then I’m not going to fuck with it anymore. Time to move on and let go of the negativity and bad things in my life.

Ed, what was the most challenging song on the album?

E-The Grinder was the hardest for me because I had to specifically encompass exactly what I wanted to say. The song is about the last time I had sex with my ex-wife. [laughs] We ran into each other at a bar and she convinced me to go home with here and we end up banging, but something happened and I realized that I could take this opportunity to really fuck with her head. If you listen to the song, most of the stuff in there happened pretty much verbatim. It’s pretty fucking ruthless.

What is the title track Earth Shook Run about?

E- I wanted to write a song that had as many hooks as metal will allow, but I really just wanted to have a bass drop over a breakdown. If Earth Shook Run was a song, that’s what it would sound like.

Constant In Motion, why did you use that for the opening track?

E-The intro really is the only reason. I couldn’t see it anywhere else. It’s one of the faster songs so I thought I’d come right out of the gate. The whole album is balls to the walls and I think it offers more than most of the other songs too. There’s fast beats, double bass, guitar solos. It kinda encompasses the whole album.

And then closing with The Destroyer, anything specific with that, or that’s just where it ended up?

E-Pretty much it just ended up last. I wanted to make something totally brutal that’s not brutal at the same time. It’s about a bunch of end of the world scenarios and centered around explosives. It has some samples from an interview with J. Robert Oppenheimer, the guy who invented the atomic bomb.

This album is awesome. I’ve really been gravitating toward the one-man-DIY approach to writing and recording. Thanks for your time guys.