MORGAN Y. EVANS: Good day! What is going on right now in Holy Grail land? I have to say I loved the band name as soon as I heard it. There is a good Holy Grail beer also. I mean, how did no one take that name ever in the history of metal! You guys should go on tour with Trouble, who also cornered the market on a perfect band name.

JAMES PAUL LUNA: Hey Morgan and Metal Riot! Wassup?! Holy Grail land is quite mellow right now, taking a breather after several great tours and… detoxing after our tour with Hellyeah, hah. I have tried the Holy Grail ale and it’s quite tasty. We either totally lucked out with our band name or we were the first band dumb enough to actually use it. I would totally tour with Trouble, that’s funny you mention them because “The Wolf” was the first cover we ever did live.

MYE; I didn’t know that. Oh shit, that’s awesome! I gotta hear it. How does it feel to be at releasing your new record and bringing your new material into the public eye? Holy Grail is really gaining some legs (that could be a pun for groupies, but…) and how does it feel compared to past bands you have been in?

JPL: Well at the moment there aren’t any feelings except for anticipation and excitement. I’m glad to be gaining legs little by little (groupies too, haha)! HG is the first band that feels like we have a chance to make a career out of it which is the ultimate dream, although we’re not quite there yet.

MYE: How has it been incorporating Alex Lee into the group? From the sound of the record he is a great fit.

JPL: We first met Alex on the Exodus tour when he was still in Bonded (By Blood) and we hit it off really well. Eli kinda took him in as a little brother on that tour. Well, miracles do happen and he came to us one day asking to join our band. Fans usually think the three of us are related so now we’re like one big happy family. 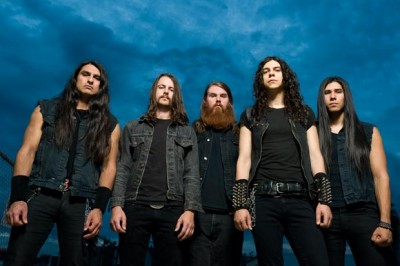 MYE: How did you feel going into this record after the good reception of “Crisis In Utopia”? Did you have clear goals of what you wanted “Ride The Void” to be like from the start? Some of you have worked together for some time.

JPL: Bottom line we wanted to make the best record possible with the abilities, time, and tools at our disposal. We knew people liked “Crisis” so we just kept building from that foundation and added some new flare here and there. Yeah I’ve been working with Tyler,  Chris Rakestraw, and Matt Hyde since before Holy Grail started, so it was a very comfortable working environment. 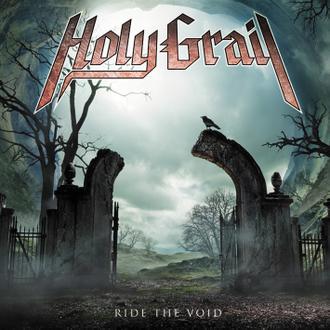 MYE: I love the cover art for “Ride The Void”. From the album title I expected a Zodiac Mindwarp or outer space time cover, but your cover art is mysterious. It kind of reminds me of King Diamond’s “Abigail 2” , but stepping through the gate into a mystic realm more than a horror house. Can you discuss the imagery?

JPL: That’s amazing you thought that, because it’s exactly what we were going for. We wanted the subject of the cover to be a vast nothingness or void. We thought Inception meets King Diamond and Dylan delivered!

MYE: Awesome. How was it working with Matt Hyde, Alan Douchess and Mark Lewis to achieve the product you wanted to make? The end result is very powerful and will surely gain you new fans. While you sound different, it kind of reminds me of how I felt when I heard Evile’s “Five Serpent’s Teeth” and thought it was the next level for the group.

JPL: Working with those guys was awesome to say the least. I’ve known Matt for almost 8 years and have tracked vocals with him for other projects so I’m glad that we finally got to work on Holy Grail together. Mark Lewis came in to mix the first album and knocked it out of the park so naturally we went with him for round two and are pretty stoked how it all came out. We also love Mark for all his workout tips and pointers on picking up chicks. This was our first time working with Alan and although we didn’t get to meet him in person his work was the perfect finishing touch and icing on the cake and would love to work together again.

MYE: Any cool stories about meeting Vinnie Paul? You also toured with Dio Disciples, right? Was it weird to hear the Dio songs without Ronnie? I mean, I support what they are doing keeping the music alive.

JPL: Vinnie Paul is the real deal, man. It was cool to get to meet him and hang with him behind the scenes. It was mind blowing to hear him give us words of encouragement. He really believes in us and told us to keep our heads above all the mess the industry is in right now. It was cool to hear he was there too touring in a van, no driver, no crew, no ego. Dio Disciples were rad and Ripper Owens had similar words of encouragement for us. It was very shocking to get props from legends like that, you know? Totally surreal.It was very depressing for me to hear all the old Dio, Rainbow, & Sabbath tunes, knowing Ronnie is gone but I’m glad they are doing that in celebration of his life and memory.

MYE: R.I.P. RJD 24/7, for sure. Can you talk about “Silence The Scream” a little bit? What were your thoughts while writing that track? When you sequence an album, do you still worry about track order as much as a band in the past would? This record really has a flow to it.

JPL: “Silence the Scream” was a song Alex wrote and we jumped on it right away to be on the album. Matt Hyde was talking about an idea he had on tour about a Roadie being the perfect serial killer so we twisted that into a lyric and there you have it.
We were very meticulous about the sequencing on this record, almost too meticulous. I’m glad you think it flows, we had a rough sequence planned even during pre-pro, but once it was tracked we tried 4-5 different sequences before we agreed on the final.

MYE: I am a big fan of shit like that! What are you proudest about when considering “Ride The Void” ? The songs are so big and powerful. What do you hope fans take away from and retain from the experience?

JPL: I’m proud we made another great record. It feels like the best thing we’ve done so far and hopefully we can raise the bar and do even better next time! I hope fans get what they expect to hear from the classic Grail sound yet fall in love all over again.