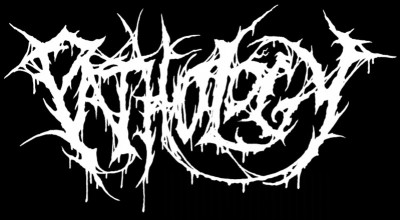 Morgan Y. Evans: What’s up, man? How are you today? What is going on in the world of Pathology? How does it feel to have the record out?

Dave Astor: Hi, doing well today. Enjoying my short time off. Right now were doing promotion for the new album and getting ready for our next tour, which will be announced soon. I’m very happy to have the new record out. We worked hard on it. I’m excited to get the tour cycle going for this album. We’re playing a lot of songs on tour. They’re a lot fun to play and they’re going over well with the fans.

MYE: How did the band come together and become so strong? You guys really have something going. It is cool seeing Victory get behind such a legit death metal release.

DA: We have had a lot of member changes and lot of ups and downs. We finally just got the right combination of people that worked.  Victory has been cool. We’re the only band on the label that sounds like us, so that’s kind of cool. They do a good job getting our albums out in the stores and a  good job promoting us and stuff.

MYE: How was it recording at Lambesis Studios? What was the experience like?

DA: It was a really great experience. Producer Daniel Castleman did a killer job. He made us play our best without stress at all. This was the first time we have ever used a click track to record. In my 18 years of playing I have never done that. It made all the difference. Everything came out very tight and on time.

MYE: I like click tracks. My favorite is when a friend like drummer Nate Kelley who I’ve worked with has used a click but still also doesn’t fight anything with an organic feel if it is a happy accident and works, but clicks are great for extra tight death metal. I like how Pathology has a real death metal sound and you’d expect gore lyrics but most of the songs on “AWAKEN TO THE SUFFERING”. I was impressed with “Humanity’s Cesspool.” The record achieves your intention of painting a bleak picture, even though the lyrics aren’t about worm filled crotches like Cerebral Bore (who I love, don’t get me wrong).

DA: Yeah, we’re not really into singing about crotches, girls or gore. I let my singer sing about almost anything he wants.  That’s his department. Our subjects are more political, sometimes conspiracy type stuff.

MYE: In the history of Pathology, what do you think stands out as your favorite show? I know it is hard to answer that but thought you’d probably have a good one as the band has such a fierce sound. People probably flip to you guys.

DA: That’s a hard one. I guess we had a killer sold out show in Europe on a tour we did with Obituary. I can’t remember where in Europe — too many brain cells ago — but, that’s probably one of my favorites.  A lot of stage diving and excitement.

MYE: What was a crucial moment that got you into the type of music you play? I can remember for becoming a death metal fan, I was super blown away when Morbid Angel released “FORMULAS FATAL TO THE FLESH”. It isn’t their oldest record but really got me into death metal more, for example (and I secretly like Steve better as Morbid’s singer, not to dis D.Vincent).

DA: Growing up my parents played in some punk bands. So i was kind of always around music when I was a kid. When I was 15 I got into playing drums and then started my first band called The Locust. The Locust were more experimental power violence. I was always more into death metal as a kid, especially old Napalm Death and Carcass. I eventually started a death metal band called Cattle Decapitation, and later on Pathology.

MYE: I saw The Locust years ago at Purchase college playing the same day as Biz Markie! It was an epic combination! Nice! Was it hard capturing Pathology’s sound in the studio for this record? You have such ugly, low tones! I also love that many songs really feature slower, chuggy riffs as well that add to the crushing claustrophobia.

DA: No, we always know what we want when we go into the studio. Or at least try. We spend a day just on tones. It did not take long at all for this one. We used a 7 string baritone guitar and decided on a Peavey 6505 tube head. I feel the tones came out killer on this recording. We really focused on slow chunky riffs. Trying to mix it up a bit.

MYE: What can you tell me about the cover art? It was done by Par Olofsson? It reminds me a bit of Vince Locke’s Cannibal Corpse “EVISCERATION PLAGUE” art (in a good way). Who is the mysterious figure in a trench coat?

DA: He is a mad doctor that is the zombies’ leader. Him and his army are taking over Earth. Par did a pencil drawing this time around. So there is not much photo shop. I think just the color. 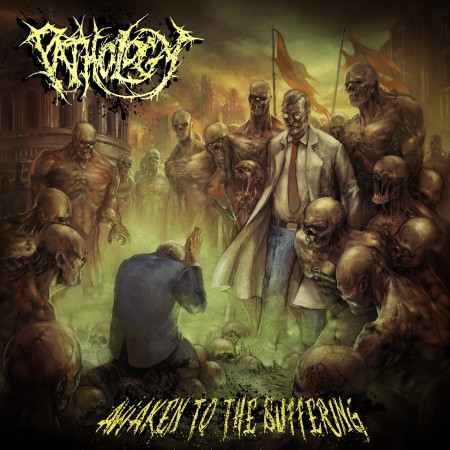 MYE: Talk about the guest vocals a bit? How did you choose who to invite?

DA: We had our good friend Obie from Inherit Disease help out on a tour a few years back and we just wanted to put him on the album. We also had a AJ from Disgorge/Defeated Sanity do 2 lines on a song. He’s also a friend and we thought it would be cool since we have had 2 other singers from Disgorge sing for us.

MYE: What do you most want to add to the legacy of heavy metal?

DA: Just want to be known as a band that was brutal and original.Thanks for the interview and thanks to all the fans that have supported us.