Sweden’s top notch heavy metal champions Sister Sin have finally released their much desired new album, the aptly titled NOW AND FOREVER (Victory). It is a statement of purpose firmly etching the band into metal’s pantheon, their best record yet! The early stirrings of talent shown on their previous releases (best showcased on the excellent 2010 release TRUE SOUND OF THE UNDERGROUND) bear fruit here and show the band in their finest form to date.

When you hear a real, hard working and true band make a mark, it is a cool feeling. Ever hear “Rapid Fire” by Judas Priest and felt amazed at how it influenced so many? Or recently I saw a Sons Of Anarchy episode that featured Social Distortion’s “Machine Gun Blues” and thought about how cool it was that a legit punk band was featured on a hit series instead of some crap. Well, NOW AND FOREVER will give you a similar feeling that genuine bands still can matter.

Sister Sin aren’t always the most cerebral or likewise depressed band, but they DO want you to feel good and remember why Rock N’ Roll can always bring people together. This is bad ass stuff that still retains grit and street cred even as the band gain ground. Their first week showed Sister Sin at #36 Top New Artist, with the Cameron Webb mixed LP instantly waking people up. Tour dates with Doro Pesch and a will to bring the metal to the people show that Sister Sin have longevity in their sights.

Morgan Y. Evans: How are you today? What are you doing? I know you always seem to be busy with music industry stuff, but do you get to relax at all as well?

Dave Sundberg: Hello! Usually yes, but with the album being released just last week it´s a lot of press and interviews, so right know there´s not much time for anything else. But it´s all good. We’re not complaining!

MYE: Ok, let’s talk NOW AND FOREVER. It is all fans have hoped for and more. I feel it really helps cement the bands identity as (hopefully) here to stay. Sometimes that third record is really where the band reaches a new level of great identity and awareness after touring and working hard and knowing each other longer. Look at Metallica, for example. Something like your song “End of the Line” sounds more assured than ever before! Fuck yeah!

DS: Yep, we´re super proud of how the album turned out! We really did our best trying to diversify our songwriting with different keys, tuning, arrangements etcetera but while still keeping our signature sound. Plus, we are a lot more confident now as a band, as songwriters and in the studio as well. The reviews thus far are fantastic and we are so excited to get more feedback!

MYE: When I saw you live opening for Otep in Poughkeepsie, NY it was very exciting. I see so many bands as a music writer and a musician myself. It felt like I was really seeing a true blue rock n’ roll act ambush the United States scene (in the best way).

DS: Thank you! We just try to give it our best the best way we can and in my opinion it’s on stage where we really shine. Although many associate us with the whole “hairband-makeup” glam era, it has never been our thing image wise. We´re all from working class families & like to keep it as honest and natural as possible. 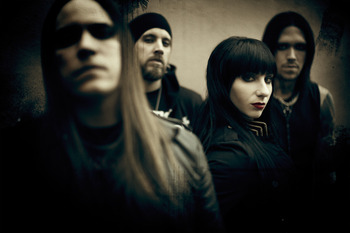 MYE:  Yeah, you are not fucking poofy hair and no depth, even when you have fun! I think on this record the hooks are bigger but still gritty. The songs feel like they just exploded out in a creative burst. What do you think generated such excitement in the band? Did you think about what you wanted to play live?

DS: We always consider the live factor when writing because touring and playing live is what we do enjoy and do best. Jimmy and I were in a very creative state when we started the process of writing this thing. I’m not really sure what happened but we wrote all the songs and pre-production in less than two months! So we were kinda nervous how this whole thing would come out because after that we went straight to the studio with our fresh material. But after getting the final mixes in from Cameron Webb, it was all a big sigh of relief (laughing). He did a really amazing job, we are really very happy with it.

MYE: Please talk about what it was like recording the album and the best times you had?

DS: We recorded the album in a small studio outside of Stockholm.  It was all a really relaxed environment with a built in apartment that we all basically lived in, except for Liv as she resides in Stockholm already. It went by quickly, about 4-weeks, and smooth! We had a great time for the most part; there was always beer in the refrigerator and lots of weed when a day´s work was done. Of course it was really stressful from time to time as it always is in the studio, but you tend to forget those moments as soon as the album´s done. It’s always worth it.

MYE: Do you feel a responsibility to keep the hard rock/metal tradition alive, or are you just concerned with being yourselves? It feels like you are having fun but also really believe in the traditions. “In It For Life”, so to speak. Speaking of which, that song is amazing. Such an anthem!

DS: In Europe we have a great tradition already, look at Wacken Festival for example… there are all these cool classic bands like Saxon whom are playing in front of 50-60.000 people and tour regularly. Plus there are a lot of new NWOBHM style bands coming up which I find really interesting. In the U.S it still feels somewhat like an uphill battle. The first time we went over there we were sure to kick all these metalcore bands in the ass since that style has been dying since early 2000 in Scandinavia, so we were super excited to introduce some new honest rock n roll!

MYE: Fuck yeah. And I love Sister Sin because you can get up there on stage with heavier bands that scream all day but you STILL put on a more intense show!

DS: Now four years later, we have definitely made a lot of headway but there’s still a long way to go. But that’s what “In it for Life” is all about, no matter where the wind blows we´ll still stand our ground & do our thing, like it or not! 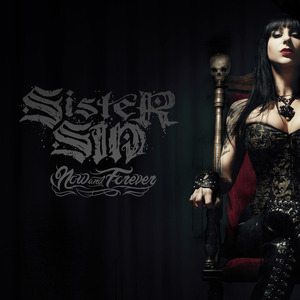 MYE: Are you excited for your upcoming tour with Doro Pesch? We sure are. How close friends are you with Doro these days? You have collaborated and are such a cool pairing.

DS: Can’t wait!!! It’s such a great package, probably the best we´ve been on in the U.S. We´ve toured a lot with Doro in Europe. We actually met her last weekend at a signing session in Sweden in a Metal Convention – both us & Doro just released our new albums and we had tables just beside each other so that was cool & we got the chance to chat quite a bit. I wouldn’t say we´re close friends like call each other up or anything but we always have a great time shredding with her and she´s such a great person. We were overwhelmed when she said yes to sing on the Motörhead cover we did and when she agreed to do the video for the song, it just felt great! I know she´s really busy these days so for her to take the time to do this was awesome!

MYE: What were some topics you wanted to talk about on this album, lyrically? I have heard the record but if you want to share your thoughts on any songs that mean a lot to you, that would be cool.

DS: I write the lyrics and am co-songwriter. I would say the hardest thing hands down is to get the melody down right and lyrics to pop out.  “Hearts of Cold” is based on the true story about a Finnish couple who were both on parole and crossed the border over to north Sweden where they went on a killing spree to make a long story short and later got convicted to lifetime in jail. The story has a nice Natural Born Killers thing to it which appealed to me and it was a really good experience to write from a different angle, in this case about psycho romance. That’s going to be our second single btw and we´re gonna shoot a video for it in December!

MYE: What do you hope to accomplish and say to the world with this album? It is really a powerful statement of ‘We are here to kick ass’!

Indeed! Get on, get with it or get out!