Morgan Y. Evans: How you doin’, man? How’s everything?

Stavros Giannopoulos: Good, man. At an art show thing. Out in the fuckin’ sun.

SG: A couple prints, yeah…sellin’ them.

MYE: Your poster art sort of crawls from the depths.

MYE: That’s hysterical. Dude, it’s great to hear the new originals. I know you’re a fan of raw production. This sounds a bit cleaner but still cuts like your rawer recordings. “An Ache For The Distance” really brings out the melodic guitar tones and expansiveness which is such a good part of your live experience. This record still is the band I love but really adds to the expansiveness.

SG: Yeah, man. We got better at what we’re doing. It’s awesome we were able to do that but could still keep it organic. We’ve refined what we were doing.

MYE: It should really translate live. Your band has such power live and this captures a lot of that vitality.

SG: We enjoy playing live and we want to play all of our songs live. We’ve gotten a better sense of who we are as a band. We’ve only been a band for a little under five years now. Playing live and going on tour and doing this through repetition has been important.

MYE: Even sorting out personalities in a band and suddenly everyone gets how the others process or understand things…suddenly you all click and it is a whole new series of breakthroughs.

MYE: The artwork is evocative regardless of the naked lady. There’s a theme of distance that really resonates.

SG: The art has a frail quality. It sets the mood for me. This record is really personal for me. As you see yourself from home, you sometimes feel like someplace else is a better spot for you and I try to use a lot of metaphors so it’s not just the same shit. For me it’s always better for the listener to connect to the lyrics on their own playing field, y’know? Me giving a shit about my own life is only going to get us so far. But yeah, as a band we enjoy being on the road and it is about our own collective experience of being in a band.

MYE: Mmmm, and especially since this is the next record you have to tour behind it is probably a tricky balance between getting out what you want to say and making it work for the whole band.

SG: Absolutely. And the fact of being on the road for so many months and not being able to wait until you can get back out or being home for awhile while we were doing the record, sort of in between states…it’s about dealing with those feelings. We went out on the road in the middle of it and then came back and finished it. You’re self sufficient at home and happy…but not satisfied. Right now money and relationships are fine but my personal self isn’t totally happy. On the road you sacrifice those other things so you can do what you do everyday. There’s a lot of substance to discuss there.

MYE: Taking the break and touring before you finished the record and then coming back, did it make it easier to finish the record or change the headspace?

SG: (laughing) Towards the end there was a bit of angst…at least in my mind. We were doing the Metal Alliance Tour and were the first band of many. You’re touring with amazing bands like Vitus, Crowbar and Helmet, so it’s amazing and a dream come true for all of us at different levels…but it was a tough tour for us.We were playing very early and a lot of the drives were fuckin’ twelve hours. Every day was another hurdle. It was a learning experience and a cutting your teeth experience more than it was a really fun time. It was paying our dues.

MYE: Well, I was glad to see your name on that tour package and you deserve it.

SG: I wouldn’t say anything bad about it. We’re all gigantic fans of those bands. Helmet, Crowbar and Vitus? And Us?! We’re gonna sacrifice whatever to do that. If you told my thirteen year old self I would be doing that he’d flip. We got to do something so many people would love to be doing. 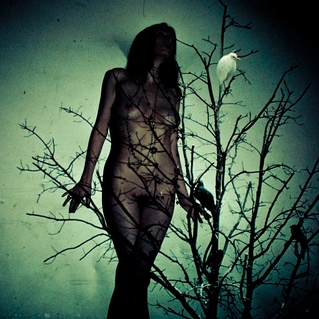 MYE: How good did it feel to finish a new record AND have James Murphy put his stamp on it? How did you want to differentiate it from “A Glorified Piece Of Blue Sky”?

SG: Well, as far as differentiating it from the last record, we just wanted to write better songs. So many bands play ten-fourteen minute songs and it just gets boring to me. Even when bands like Metallica that I grew up loving would do that I felt like there was still a song there. We have a better understanding, like I said, of who we are as a band and are trying to hone all of our individual skills into what we are good at. Getting over ego things. Settling into certain roles in our band. Focusing on what you do best and make it great. Write a better record. “A Glorified…” was a great first offering but doesn’t show how far we could go. Every day we’re a band we are getting better. Having someone like James Murphy in any sort of regard involved…FUCK! If I’d told me in High school that the guy from Death would master my record I would’ve had a heart attack. He’s pre-our scene in metal and was supportive of what we’re doing. I know how I am with music and metal especially. I put on a death-core record of today and think it is bullshit. I can almost see a a guy like James Murphy hearing us “new jacks” screaming over Cure riffs and thinking,”Who are these douche bags”, y’know? (laughing)

MYE: (cracking up) “Pictures Of Xasthur”!

SG: Instead he was like,”Oh man! That fuckin’ rules”. It was great getting that opinion from someone whose opinion I think matters. If a dude from Death told me I sucked it’d be bad, but if someone on the street tells me I suck, whatever…y’know? (laughing)

MYE: You’d lose all your metal points! I love “Holes In The Desert”. It almost reminds me of psychedelic folk music in parts amidst the heavy.

SG: Yeah, that stuff is all Dave. He wanted to sing pirate type stuff. It’s all very yo ho ho and a bottle of rum. This is the first band Dave and I have ever sang in. I think our vocals have come a long way. I don’t consider myself a vocalist and don’t think Dave does either, so it is pretty incredible over the years to feel some evolution.

MYE: What are you most looking forward to about getting out and showing people this stuff live?

SG: Not being at home! First and foremost getting the fuck out of my house! The response to our last record was half and half. People really getting it or not. We felt like we had something to prove and that we were a legit band and aren’t going to go anywhere.

MYE: You make your own art from the music to the art itself and the recordings.

SG: Now it is like, “Fuck you. This is what’s going on.” We have a very clear vision of what’s going on and I don’t want anyone else trying to figure out what our band is getting across. That’s half the reason we started doing the vocals. What were the people we tried out representing? We met some cool people in the process, but…It’s about us saying we wanted our band to be represented correctly.

MYE: Dillinger Escape Plan managed themselves for a long time so no one could feed them a line of shit.

SG: Definitely. We put a lot of time into anything we do and the more I see other bands let other people make calls for them or small details…I wouldn’t want anyone else being chief. To me, if I was paying someone to do artwork and they told me this is how it is, I’d tell them to go fuck themselves.